I love the humanitarian work of Convoy of Hope wherever there is a need. They are on the front lines of Ukraine right now. If you are looking for a good organization to support financially, please check out their current efforts and click the Donate button on their page.

“[God] does not need us. If we stay away He is not impoverished. He does not need us in order to be happy in the fellowship of the Trinity. But He magnifies His mercy by giving us free access through His Son, in spite of our sin, to the one Reality that can satisfy us completely and forever, namely, Himself. ‘You make known to me the path of life; in Your presence there is fullness of joy; at Your right hand are pleasures forevermore’ (Psalm 16:11).” —John Piper

“Good preachers are good learners, and not just of the Scriptures. They need to understand the times and the ways the times impact the people they are called to serve. Preachers who know their sheep well, as our Good Shepherd exemplified for us, will hear their concerns, understand their thoughts, discern their hopes and fears, and be able to preach in a way that speaks directly to their souls with transforming grace and power. Let us strive to be sons of Issachar when it comes to the ministry of God’s Word.” —T.M. Moore

I love the Babylon Bee! Here is something that should make every pastor say, “Aha!”—Scholars Discover Introductory Notes To Paul’s Epistles That Dismissed The Children To Youth Ministry So The Adults Could Hear The Message

This week I shared another exclusive video with my Patreon supporters. Please consider supporting this ministry at just $5 per month. I also shared this public video especially for my fellow pastors:

John Stonestreet wrote about our amazing brain. What a marvelous thing our Creator has given us! Here is just one example: “In 2013, a collaboration between Japanese and German scientists created one of the most realistic brain simulations ever attempted. They used what was, at that time, the world’s fourth-largest computer, containing over 700,000 processor cores and producing an eye-popping 1.4 million gigabytes of RAM. The machine worked at top speed, crunching numbers for over 40 minutes. In the end, it produced just one second of simulated brain activity.”

I love the humanitarian work of Convoy of Hope wherever there is a need. They are on the front lines of Ukraine right now. If you are looking for a good organization to support financially, please check out their current efforts and click the Donate button on their page.

Dr. Roy Spencer always brings clarity to the climate change debate. Here is a post looking at the numbers behind the claims that climate change is largely man-made.

I love following the archeological and paleontological discoveries as they come to light. The Institute for Creation Research shares some enlightening news that comes from the discovery of a human vertebra.

Dan Reiland shares about 5 enemies of the soul that hurt your church.

Cold-case detective J. Warner Wallace talks about the evidence that makes the resurrection of Jesus a reasonable conclusion:

“For the diligent the week has seven todays, for the slothful seven tomorrows.” —Anonymous

In light of all the uncertainty around us, this quote is a good reminder. “I want you to pray about world events and pursue peace as you are able. However, it’s crucial to recognize what you can change and what you cannot. Fretting about things that are beyond your control will drain your energy and discourage you. Instead of this hurtful focus, endeavor to fix your thoughts on Me. … Remember that I am a God of justice and I know everything. Eventually I will right all wrongs. So be still in My presence—trusting in Me with a steadfast heart while waiting for Me to act.” —Sarah Young, in Jesus Always 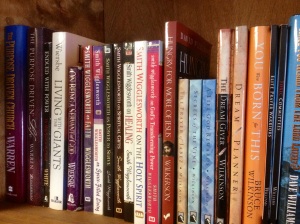 I love reading, and I love sharing my love of good books with others! Here is a list of the books I read and reviewed in 2017. Click on a title to be taken to that review.

A New Kind Of Apologist

Everything You Always Wanted To Know About God

Evidence That Demands A Verdict

How Great Is Our God

Interpretation Of The Scriptures

Joy To Your World

Know Who You Are

Leadership Promises For Every Day

Longing For A Changed World

Marching Off The Map

Peace In The Face Of Cancer

Shade Of His Hand

Take Your Life Back

The Christian Book Of Mystical Verse

The Christian In Complete Armour

The Dawn Of Christianity

The Servant As His Lord

When A Nation Forgets God

Your Next 24 Hours (book review)

When it comes to compassionate actions that are changing the world, Hal Donaldson—who founded the Convoy of Hope—knows what he’s talking about! Hal is passionate in letting everyone know that they, too, can be world changers. That message comes through loud and clear in his book Your Next 24 Hours.

Hal Donaldson turned a near-devastating situation in his young life into a relentless pursuit to show others the kindness he was shown. Throughout this book, he shares his personal story, as well as stories from some well-known people, and some not-so-well-known folks. In story after story one message becomes crystal clear: You don’t have to have a lot of money or celebrity status to do something kind for someone else.

Each 24-hour day presents us with abundant opportunities to see a pain that needs to be addressed, to show kindness, to do something that touches another life for good. And just in case you’re having a difficult time coming up with some world-changing ideas, Donaldson shares a few “Kind Ways” at the end of each chapter which anyone can do.

As he opens the book, Hal reminds us, “The enemies of kindness are fierce, and you’re only one person. But what if every person was a relentless force for good? Overnight, a revolution of kindness would dethrone a culture of greed and self-centeredness. The world would be a different place. You have more power and influence than you think.” (emphasis mine)

I am very excited to recommend this book to you! Already I have shared some of the “Kind Ways” with others and have used some of them myself. I’m excited to see a revolution of kindness that begins in the lives of each person who reads Your Next 24 Hours!

I am a Baker Books reviewer.

I am a huge fan of Convoy Of Hope! Here is a video update of their work helping to minister to the people who have been hardest-hit by Hurricane Sandy—

I love to see when individuals and businesses and organizations come together to address a pressing need. Sometimes we see it in short bursts (like tsunami or earthquake response), but once the tragedy is no longer in the headlines, people quickly forget. But the need remains.

(Red) is an ongoing project addressing the huge need of AIDS in Africa.

Convoy of Hope not only responds immediately to disasters but stays in place for the long haul to make sure that infrastructures and displaced people are reestablished.

Christians, we need to especially be people who stay informed and get involved.

We had a great time Rockin’ For Haiti on Friday night! This was our fundraiser for Convoy of Hope, to assist them in their work in both Haiti and Chile. Based on the amount of money we raised, we’re helping COH provide nearly 500 meals!

We’ve already got our next benefit show planned. Save Friday, April 30, for Rockin’ For Smiles. More details coming later, but Edge From Falling will be our headline guest.

A couple other things to keep on your radar screen (and your calendars):

So many great opportunities to invite your friends to meet Jesus—just like Andrew did. I hope to see you at Calvary Assembly of God soon.

We are hosting another benefit show at Calvary Assembly of God. Our first show was a fundraiser for Latin America Child Care, and it was very well received.

This rock show is a fundraiser for Convoy of Hope. COH is a wonderful humanitarian organization that is bringing food, water purification systems, and other vital personnel and supplies into two areas that have been ravaged by earthquakes: Haiti and Chile.

It’s just a $2 cover charge to get in. Currently we have three local bands scheduled to perform. All our proceeds will go directly to COH.

I’m a big fan of Convoy of Hope. They provide timely humanitarian need in time of disaster, giving people a tangible picture of the compassion of Jesus.

A couple of huge miracles…

You can see a video update from COH president Hal Donaldson. You can also donate to COH here.

Our church took a special offering for Convoy of Hope on Sunday. I’m glad we can help in this way.

How in the world am I going to link these three thoughts? I think I can do it, but first, a little historical background…

Have you ever noticed in the Bible how much the Jews disliked the Samaritans? In fact, it was said that if a Jew had to even say the word Samaritan he would immediately spit to get that vile word out of his mouth. Where did this come from?

The Samaritans would make deals and alliances with any surrounding country and their false deities to save their necks from other invaders. In effect, they made a deal with the devil.

Pat Robertson made a foolish comment that the earthquake in Haiti was because the Haitian people had “made a deal with the devil” to kick the French out of their country.

Did the Haitians make such a deal? Did the Samaritans? It’s very likely.

Yet when Jesus was asked to explain what it meant to love one’s neighbor, whom did He use as an example? A Samaritan!

Demonic deal or not, God desperately loves the Haitian people. Jesus died to bring Haitians into a personal relationship with Himself. God grieves over the devastation in that country.

Mr. Robertson, now is not the time for judgmental statements. You are not the one who should be making such statements. Now is the time for compassion. Can you imagine Jesus saying to the woman at the well, “Since you live in a country where your ancestors made a deal with the devil, you’re disqualified. I have living water to give, but you’re not getting any of it because you are under a curse”? I can’t imagine that.

If you’d like to show compassion to these precious people, can I recommend making a donation to a wonderful organization called Convoy of Hope? Please keep praying for the Haitians.