20 Facts & Tips About Your Body Clock 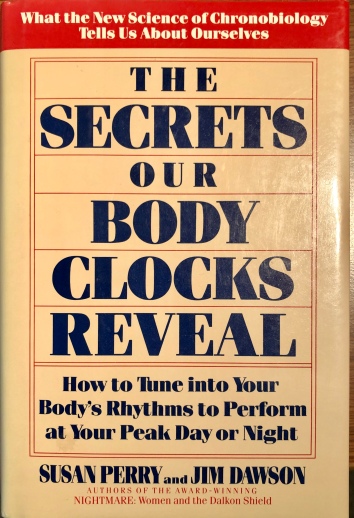 I really enjoyed reading The Secrets Our Body Clocks Reveal (you can read my full book review by clicking here). From this book, I’ve begun implementing a few of the tips I discovered. Here are a few of the facts and tips that I found interesting.

I’ll be sharing some of the research that Susan Perry and Jim Dawson uncovered about the importance of sleep soon, so stay tuned!

“When something drops into your life that seems to threaten your future, remember this: The first shock waves of the bomb are not sin. The real danger is yielding to them. Giving in. Putting up no spiritual fight. And the root of that surrender is unbelief—a failure to fight for faith in future grace. A failure to cherish all that God promises to be for us in Jesus.” —John Piper

“The ultimate test of man’s conscience may be his willingness to sacrifice something today for future generations whose words of thanks will not be heard.” —Gaylord Nelson

My fellow pastors, may this be said of us: “Even now the Lord is raising up godly watchmen to speak for Him in these times. These shepherds are grieving, weeping and repenting as they seek God’s face. And I believe they’re hearing and understanding the Lord’s message behind the present events. Moreover, they’re not afraid to proclaim dire warnings, because they know they’ve heard from God. They’re compelled to speak of His purposes behind our calamities.” —David Wilkerson

“Who is doing exploits for God today? Where is the enemy being driven back? That is the great yearning of all spiritually-minded people. They are not enchanted with polished sermons and slick organizational technique. Where are the mighty men and women anointed by God to truly make a difference?” —Jim Cymbala

Good read for anyone in church leadership: 10 Fine Lines Of Church Leadership Tension.

Medical science validates what Scripture tells us: Unforgiveness can be lethal.

In the United States, roughly 10% of people struggle with dyslexia. Here are some helpful ways to make your materials more dyslexic-friendly for them.

J. Warner Wallace shares 6 pieces of evidence that point to our  universe having a beginning.

[VIDEO] Probably the best baby announcement I have seen yet—

“I sometimes pray ‘Lord give me no more and no less self-knowledge than I can at this moment make a good use of.’” —C.S. Lewis

“Be of good courage, and wait on the Lord, setting this constantly in your minds that He has not promised to keep you from trouble, but to preserve you in it.” —Charles Spurgeon

“‘Did you win?’ A far better question to ask (the student, the athlete, the salesperson, the programmer…) is, ‘what did you learn?’ Learning compounds. Usually more reliably than winning does.” —Seth Godin

Well, look at that: The federal government now says monogamy and abstinence is the most reliable way to protect against sexually-transmitted diseases.

This is a good list: 7 secrets you should never keep from your doctor.

In light of Tullian Tchividjian’s resignation, Rob Hoskins shares a timely word from his Mom: The Christian Response.

[VIDEO] Whether or not you are a church history buff, this is some interesting information on the Nicene Creed—

William Bennett and Robert White have given us an important book, especially during this time when so many are rushing to legalize marijuana in our country. You can read my full book review by clicking here, and below are some of the quotes and statistics I found quite interesting.

“No scientific studies documented the safety or efficacy of marijuana for patients with cancer, HIV, multiple sclerosis, or glaucoma.”

“Marijuana stays in the brain for a long time so that the brain is still experiencing the effects from pot smoking days after the drug use as stopped, in contrast to alcohol use…. Unlike cocaine, which often brings users to their knees, marijuana claims its victims in a slower and more cruel fashion. It robs many of them of their desire to grow and improve, often making heavy users settle for what is left over in life…. Marijuana makes its users lose their purpose and their will, as well as their memory and motivation.” ―Robert Dupont, psychiatrist

“Frequent marijuana smokers can have many of the same respiratory problems experienced by tobacco smokers. … There are 33 cancer-causing chemicals contained in marijuana. … When equal amounts of marijuana and tobacco are smoked, marijuana deposits four times as much tar into the lungs.”

“Teenagers who use marijuana regularly are at greater risk for long-term brain damage and declines in both IQ and cognitive functioning years later.” ―Psychology Today

“Most drug users, over 90 percent of them, including marijuana users, started using drugs in their adolescent years. In fact, if one abstains from substance abuse up to the age of twenty-one, the chances one will ever have a substance abuse problem are next to zero.”

“Marijuana also raises heart rate by 20-100 percent shortly after smoking; this effect can last up to 3 hours. In one study, it was estimated that marijuana users have a 4.8-fold increase in the risk of heart attack in the first hour after smoking the drug.”

“Accidents would increase, healthcare costs would rise and productivity would suffer. Legal alcohol serves as a good example: The $8 billion dollars in tax revenue generated from that widely used drug does little to offset the nearly $200 billion in social costs attributed to its use.” ―Kevin Sabet, a former adviser to President Barack Obama

“In constant dollars, the money spent by Americans on marijuana went up from $21.6 billion in 2000 to $40.8 billion in 2010. That is more than Americans spend each year on pornography, Halloween, and video games combined.”

“Sixty-two percent of the adults who first tried marijuana before they were 15 are likely to go on to use cocaine.”