“The thoughtless, the ignorant, and the indolent, seeing only the apparent effects of things and not the things themselves, talk of luck, of fortune, and chance. Seeing a man grow rich, they say, ‘How lucky he is!’ Observing another become intellectual, they exclaim, ‘How highly favored he is!’ And noting the saintly character and wide influence of another, they remark, ‘How chance aids him at every turn!’ They do not see the trials and failures and struggles which these men have voluntarily encountered in order to gain their experience; have no knowledge of the sacrifices they have made, of the undaunted efforts they have put forth, of the faith they have exercised, that they might overcome the apparently insurmountable, and realize the Vision of their heart. They do not know the darkness and the heartaches; they only see the light and joy, and call it ‘luck.’ They do not see the long and arduous journey, but only behold the pleasant goal, and call it ‘good fortune,’ do not understand the process, but only perceive the result, and call it chance.” —James Allen, in As A Man Thinketh

I love reading, and I love sharing my love of good books with others! Here is a list of the books I read and reviewed in 2019. Click on a title to be taken to that review.

As A Man Thinketh

Expository Thoughts On The Gospels

He Chose The Nails

Life In The Spirit Study Bible

Start With The Heart

Studies In The Sermon On The Mount

The Art Of War

The Autobiography Of Charles Spurgeon

The Gospel Of The Kingdom

The Jesus Who Surprises

The Way Of The Warrior

Freed From A Self-Made Prison

“Sickly thoughts will express themselves through a sickly body. Thoughts of fear have been known to kill a man as speedily as a bullet, and they are continually killing thousands of people just as surely though less rapidly. The people who live in fear of disease are the people who get it. Anxiety quickly demoralizes the whole body, and lays it open to the entrance of disease; while impure thoughts, even if not physically indulged, will soon shatter the nervous system.

“Strong, pure, and happy thoughts build up the body in vigor and grace. The body is a delicate and plastic instrument, which responds readily to the thoughts by which it is impressed, and habits of thought will produce their own effects, good or bad, upon it. …

“To live continually in thoughts of ill will, cynicism, suspicion, and envy, is to be confined in a self-made prison-hole. But to think well of all, to be cheerful with all, to patiently learn to find the good in all—such unselfish thoughts are the very portals of heaven; and to dwell day by day in thoughts of peace toward every creature will bring abounding peace to their possessor.” —James Allen, As A Man Thinketh (emphasis mine)

You can check out other quotes from As A Man Thinketh by clicking here.

Poetry Saturday—Mind Is The Master

Mind is the Master power that moulds and makes,
And Man is Mind, and evermore he takes
The tool of Thought, and, shaping what he wills,
Brings forth a thousand joys, a thousand ills:—
He thinks in secret, and it comes to pass:
Environment is but his looking-glass. —James Allen, in As A Man Thinketh

10 Quotes From “As A Man Thinketh”

As A Man Thinketh feels a lot like the biblical book of Proverbs, stimulating us to think about our habitual thought patterns. Check out my full book review by clicking here.

“Man is made or unmade by himself; in the armory of thought he forges the weapons by which he destroys himself; he also fashions the tools with which he builds for himself heavenly mansions of joy and strength and peace.”

“The soul attracts that which it secretly harbors; that which it loves, and also that which it fears; it reaches the height of its cherished aspirations; it falls to the level of its unchastened desires.”

“Good thoughts and actions can never produce bad results; bad thoughts and actions can never produce good results. This is but saying that nothing can come from corn but corn, nothing from nettles but nettles. Men understand this law in the natural world, and work with it; but few understand it in the mental and moral world (though its operation there is just as simple and undeviating), and they, therefore, do not co-operate with it.”

“A man only begins to be a man when he ceases to whine and revile.”

“Men imagine that thought can be kept secret, but it cannot; it rapidly crystallizes into habit, and habit solidifies into circumstance.”

“They who have no central purpose in their life fall an easy prey to petty worries, fears, troubles, and self-pityings.”

“This is the royal road to self-control and true concentration of thought. Even if he fails again and again to accomplish his purpose (as he necessarily must until weakness is overcome), the strength of character gained will be the measure of his true success, and this will form a new starting-point for future power and triumph.”

“The oak sleeps in the acorn; the bird waits in the egg; and in the highest vision of the soul a waking angel stirs. Dreams are the seedlings of realities. Your circumstances may be uncongenial, but they shall not long remain so if you but perceive an Ideal and strive to reach it. You cannot travel within and stand still without.”

As A Man Thinketh (book review)

“For as he thinketh in his heart, so is he,” said the wise King Solomon nearly 3000 years ago. James Allen picked up on this phrase and noticed how true it still was in his day, prompting him to pen some astute observations in his book As A Man Thinketh.

This is not an academic book, nor is it a self-help book. Mr. Allen states his rationale for writing on the opening pages: “This little volume (the result of meditation and experience) is not intended as an exhaustive treatise on the much-written-upon subject of the power of thought. It is suggestive rather than explanatory, its object being to stimulate men and women to the discovery and perception of the truth that—‘They themselves are makers of themselves.’”

Just as the biblical book of Proverbs contains short observations that are intended to cause the reader to contemplate the outcome of particular life choices and thought patterns, Mr. Allen does the same thing for a contemporary audience. Although you could breeze through this short book quite quickly, I strongly urge you to take your time to ponder just how powerfully your patterns of thought contribute to your everyday actions.

Metacognition is a psychological term meaning to think about what you think about. As A Man Thinketh will definitely stimulate some productive metacognition of your own.

I Am What I Think I Am

Years ago I read a book that transformed the way I read and studied. This one book probably caused me to become a more discriminating reader than any other factor. Although it’s less than 50 pages long, As A Man Thinketh by James Allen revolutionized my thinking. Over the last couple of days, I’ve been listening to the audiobook as I have been driving around.

Here’s a quote from James Allen:

“A man is literally what he thinks, his character being the complete sum of all his thoughts. … A noble and Godlike character is not a thing of favor or chance, but is the natural result of continued effort in right thinking, the effect of long-cherished association with Godlike thoughts.”

This is what the Bible says about the seeds of great thoughts:

What are you thinking about today? What’s going in? You are making yourself by what you are thinking, so choose those thought-stimulators wisely. 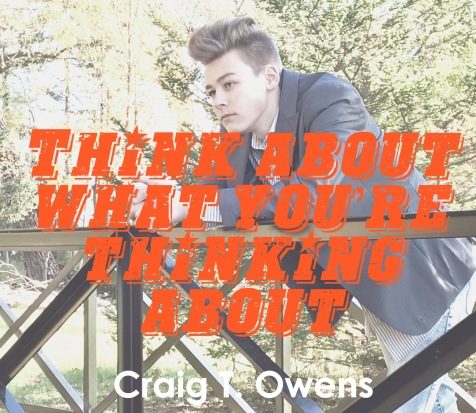 When was the last time you thought something new for the first time? Atheist Bertrand Russell said something painful, but true, “Most men would rather die than think. Many do.”

I’ve written before about the most important and most lengthy conversation all of us have every day. It’s the conversation we have with ourselves—it’s called thinking. But for many people, their thinking is stuck in a rut.

Two books that have really helped my thinking are As A Man Thinketh (James Allen) and Thinking For A Change (John Maxwell). Allen uses the analogy of our minds as gardens where we need to constantly pull out the weeds and plant the thoughts that will bear the fruit we desire. Maxwell challenges us to look differently at the way we think our thoughts.

The Apostle Paul tells us to take captive every thought and make it obedient to Christ (2 Corinthians 10:5). And then we can begin to change the way we think: Fix your thoughts on what is true, and honorable, and right, and pure, and lovely, and admirable. Think about things that are excellent and worthy of praise (Philippians 4:8).

“Rarely do we find men who willingly engage in hard solid thinking. There is an almost universal quest for easy answers and half-baked solutions. Nothing pains some people more than having to think.” —Martin Luther King, Jr.

If your thinking is ever going to go to a higher level it has to start with this: You have to be willing to think about what you’re thinking about.