13 Introspective Questions From “Longing For A Changed World” 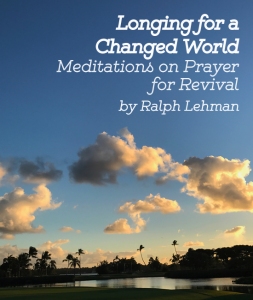 As Ralph Lehman made his case for Christian to (re)establish a prayer focus for revival in his book Longing For A Changed World, he asked several penetrating questions. Here are a few of them for you to consider.

“[Josiah’s revival] was one revival that began with the leaders of government. Are we praying for our leaders?”

“Our government has entered many areas that were once considered to be the Church’s sphere of ministry. How can we lead our churches back into these areas?”

“Have you considered that you are grieving the Spirit when you deprive Him of conversing with God by choosing not to pray?”

“As men of prayer, should we not strive to be like the great prayer warriors of the Bible?”

“Tertullian, a church father who lived in the Roman Empire around 200 A.D., stated that the Roman emperor and his armies benefited greatly from the prayers of the Christians who interceded on their behalf. Can we present the same argument to our political leaders today?”

“What would we be willing to leave or to set aside for the sake of more time in prayer, seeking the Kingdom and righteousness of God?”

“Do we seek the Lord of revival, or merely desire His blessings?”

“If we do not enjoy God’s presence, through His Word and prayer, we are missing the true blessing God intends for us—the blessing of Himself. If we will not seek the presence of God day by day, how can we expect Him to go with us in our daily lives?”

“If God was willing to take the Israelites into the Promised Land without His presence [Exodus 33:3-4], what does this say to the proponents of the ‘health and wealth’ gospel?”

“Even though we have been blessed immeasurably by living here in the United States, do our hearts long for God’s rule to be acknowledged in our land? Do we yearn to abide in His presence? Or are we idle in our contentment with the milk and honey?”

“Sometimes, our areas of giftedness become spheres where we fail to ask God for strength. Have you considered your strengths may be the very areas that satan exploits?”

“Are we praying for revival, are we also praying that we would conduct ourselves in such a way that the world would take notice, even if this meant for us to suffer?”

“Is the God of today’s church big enough to surprise us?”

You can check out some other quotes from Longing For A Changed World by clicking here, and my full book review is available here.

[Repost] Do You Read The Bible Or Does The Bible Read You?

My wife and kids are on spring break this week, so I’m taking a little blogging break to spend some time with them. I am becoming more and more concerned at the level of biblical illiteracy I observe every day. Even among the pastorate this is becoming quite alarming to me. There is quite simply no book which can compare with the Bible! So this week I’m re-posting a few thoughts I have shared about God’s Word.

I’ve been studying the lives of the kings of Judah. The last God-fearing king before the fall of Jerusalem was a man named Josiah. He became king as an 8-year-old, and really began looking for God as a teenager. Apparently during all of this time, the book of the Law (the first five books of our current Bible) was hidden away and forgotten. As Josiah started seeking God, he gave orders that the temple in Jerusalem be repaired. During the clean-up work, the workers rediscovered the book of the Law and brought it to the palace. They began to read the Law to Josiah…

When the king heard the words of the Law, he tore his robes.

Tearing of the robes is a sign of deep mourning. The words of Scripture cut Josiah like a dagger to the heart because he knew he and his people weren’t living according to God’s standards. He started telling everyone the Scriptural standards that they needed to honor, and had the words of the Law read aloud for everyone to hear. Then in the presence of everyone, Josiah reaffirmed his commitment to be a man who lived by the words of God’s Word.

This got me thinking:

Do I just read the Bible? Or do I allow the Bible to read me?

It was a beautiful sunny evening. All of my work was done, Betsy was home from school, our cooler was packed, and we were off to the park. We were all looking forward to spend this lovely evening grilling some hotdogs, splashing in the water, enjoying the breeze off the lake, and just spending time as a family.

But like an unexpected rear-end collision, all our plans for a fun evening were smashed in a single moment. As we were carrying our cooler and towels and toys toward the picnic tables, a couple of my kids acted up… they broke some of our family no-no’s.

Their actions took less than two seconds. It was just between two of them. But the entire family was affected. We turned around and headed home. No hotdogs on the open grill, no beach time, no after-dinner walk on the trails.

Two made a mistake, but all suffered because actions have consequences.

Isaac Newton said for every action there is an equal and opposite reaction. We often think of this when, for instance, in a game of billiards the cue ball hits another ball. The energy from the cue ball is transferred to the other ball, moving it in the direction is was struck. Sometimes we might be tempted to believe that the only two balls affected were the cue ball and the ball that was struck. But that is not correct. Since those two balls have now been moved to another position on the table, their new positions now affected the entire table… the entire game is now different because of an action and reaction.

In Old Testament history, we see good consequences. King David was a righteous man, one who loved God and obeyed God’s commands. About 300 years later King Hezekiah sat on the same throne of Israel. When the Assyrian army was headed toward Jerusalem, Hezekiah prayed and asked for God’s help. God responded, “I promise that the king of Assyria won’t get into Jerusalem, or shoot an arrow into the city, or even surround it and prepare to attack…. I will protect it for Myself and for My servant David.”

And we see bad consequences. There was a wicked king of Judah named Manasseh. He is not only one of Judah’s longest-reigning kings, he is widely regarded as Judah’s most wicked king. Yet in his lifetime, his kingdom seemed to prosper. And even though his grandson Josiah turned away from evil and turned toward God like no other king ever had done before, just four years after his death Jerusalem fell. King Jehoiachin was defeated and all of Judah was carried off into exile by Nebuchadnezzar as a consequence of Manasseh’s sinful behavior.

Our kids that acted up wrote notes of apology which they read to the family (as we ate our hotdogs at home) and we all forgave them. And we had a nice evening playing around the house. But the evening still had the tinge of regret for what could have been.

What about you? What will your descendants feel about the consequences they are experiencing because of your choices today? It’s up to you, and it’s for them, so live right today.