Which Engine Drives You?

There’s a little song that makes me chuckle every time I hear it, and I may have even sung this song a couple of times myself. It goes like this, “I had a lot to do today, but you know what I did instead? I took a nap. It was a very good nap.”

We’ve all been there. There are things we know that we should do, but we simply don’t feel like doing them. We let our feelings drive our actions. There are several seemingly innocent things that we can handle this way, with no apparent problems created for ourselves.

The real problem comes in when our feelings continually drive our actions. Because the caboose which must follow that engine can easily become “my truth.” It goes like this:

This could be called pragmatism—allowing a positive outcome to determine what I believe to be truth.

But our feelings may lie to us. Our feelings can make us believe something is harmless, when in fact it may be putting us on a path from which it may be extremely difficult to recover.

Jesus taught us a different way. He prayed this way to His Father, “Your Word is truth” (John 17:17). He may have had in mind these words from the psalmist:

The sum of Your word is truth—the total of the full meaning of all Your individual precepts; and every one of Your righteous decrees endures forever. (Psalm 119:160 AMP)

When we let truth drive our actions, we are performing those actions in faith that good feelings will follow. Now the progression goes like this:

I may not feel like exercising, but I know it’s good for me. So I do it and then I feel good for doing it, and my body is healthier for doing it.

I may not feel like forgiving the one who wronged me, but I know God says I should. So I do it and then I feel good for doing it, and my emotions are healthier for doing it.

I may not feel like speaking the tough word in love to my friend, but I know the Bible says I should. So I do it and then I feel good for doing it, and my relationship is healthier for doing it.

We should not say, “God, please bless what I’m doing so that I can feel good about it,” but instead we should say, “God please help me to do what You say is right, and I know I will feel good because Your blessing will be on it.” 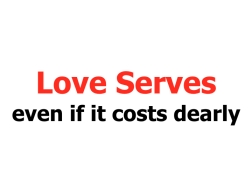 True love is never pragmatic. Although culture tells us it is:

In writing to the church at Ephesus, Paul told them he became their servant—literally this means their waiter. But not so he could get something out of it. Instead it was a love completely focused on them…

Speaking to the Ephesian leaders as he was traveling to Jerusalem, he said…I served the Lord with great humility and with tears (Acts 20:19)

Dear Christian, is this the kind of love you demonstrate? Do you share God’s grace with the hurting? Do you walk alongside those who are limping or about to give up? Do you stand through the storms with those on the battlefield?

The Apostle Peter uses an appropriate term for Christians living on Earth: “Aliens and strangers.” This means that those who call Jesus their Lord are to live a counter-cultural lifestyle. Not a lifestyle that changes with the popular culture, but one that stays true to God’s Word.

There probably has never been a more controversial subject in any day or culture than marriage and the relationship between the sexes. Why are these terms “controversial”? I suspect it is because we are naturally bent toward being pragmatic people.

In pragmatism, the outcome determines meaning. If I find something easy to do, convenient for me, and I seem to get applause from those around me, then what I did must be right. However, if it’s challenging to stick with something, and seemingly only a few people approve of how I do it, then it must be wrong. That is letting culture determine morality, instead of letting God determine it.

In the same way as what? Actually, if you look at the five verses that come before this you will see that it’s not what but Whom. Those verses are talking about our example in Jesus. Peter points out that Jesus showed:

Pragmatism looks at God’s design and says, “Yes, I understand that, but….” Pragmatism tries to find an “out” or a “loophole” that let’s someone change a definition or skip out on doing something God’s way.

If anyone ever had the authority to say, “Yes, Father, I know what You want Me to do, but look how they’re treating Me” it was Jesus.

But Peter says, “Wives and husbands, exhibit the same submission, longsuffering, servant-leadership, respectful behavior, mercy and forgiveness toward your spouse as Jesus exhibited toward you!”

So the question we need to ask is: Am I thinking about marriage—a husband’s role, a wife’s role—in counter-cultural biblical terms or in popular cultural terms?

If I find I am thinking culture’s thoughts, am I willing to try God’s way?

Join me next Sunday as we look at this passage again, and see how a wife and husband can love and serve each other in a God-honoring, counter-cultural way. If you’ve missed any messages in this series, you may find the complete list by clicking here.

The battle cry of this pragmatic generation boils down to this: “Don’t judge me! Let me live my life my way!” To the pragmatist there is no objective right or wrong, but right or wrong is determined by whatever seems right/wrong to each individual.

Oops, I take that back. This is actually revenue for the economy and a boost for the Medicare and Social Security programs that we would be seeing now if nearly 57 million babies hadn’t been aborted in the United States since 1973. The additional workers which have been lost before they were even born would have easily added this to our economy.

The Bible challenges us to: “Speak up for those who cannot speak for themselves; ensure justice for those being crushed” (Proverbs 31:8).

I believe the time to say, “Enough!” has come. I also believe this call to action needs to come from our moms. Several places in the Scripture the fierceness of warriors is actually compared to the fierceness of moms. Like when talking about King David and his warriors—You know your father and his men; they are fighters, and as fierce as a wild bear robbed of HER cubs… (2 Samuel 17:8).

Did you catch that? David’s fierceness wasn’t described in masculine terms, but in terms of a Momma Bear that lost her cubs!

C’mon, Momma Bears, we need you to growl fiercely!

Here’s a really simple true-false quiz for you. Anyone who has ever been in church should be able to handle this one simple question. Are you ready? Your one question is—True or False: The Bible contains the Word of God?

The worldview which dominates today is usually one of pragmatism. That means people do what feels right to them in the moment, and then they determine the rightness or wrongness of their decision based on the outcome. In other words, if they like how things turned out they must have done something right, and if they don’t like the results then they must have done something wrong.

Christians, however, need to see the short-sightedness of this. The Apostle Peter shows the contrast between how accurate God’s Word is and how false teachers want to “exploit you with stories they have made up” (see 2 Peter 1:20-2:3), and how destruction is the end result for those with a pragmatic worldview.

It is by no means an easy thing for Christians to discipline themselves to have a consistent biblical worldview. It’s easy to simply reject something because it doesn’t appear to be “churchy” or receive something because it’s been done in the church for years. The hard work comes in this:

This week I’d like to give you the same challenge I gave my congregation: How can you STEP UP your involvement in the Word this week?