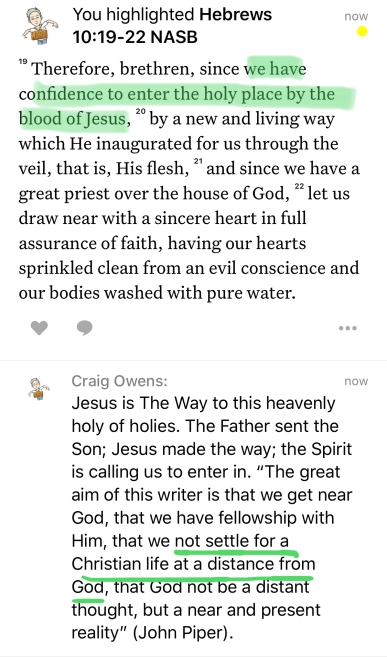 What was on top of the ark of the covenant, covering and superseding the Law that was inside the ark? It was the mercyseat (or the “atonement cover” in some translations). The mercyseat is where the high priest sprinkled the blood of the sacrificial lamb every year to make atonement for sins.

Jesus became the once-for-all sacrificial Lamb to make ultimate atonement for all who would believe in Him. When Jesus had finished His work on the Cross, the curtain separating us from the Most Holy Place was torn in two. The ark of the covenant of the Lord with its covering mercyseat—the presence of God—was now accessible to all of us! It was accessible because it was in Jesus, and when I have taken Jesus as my atonement, He is in me and He takes me in to the Father. The mercyseat of my heart has been sprinkled with the blood of the Lamb (see Hebrews 9:1-5, 11-14; 10:19-22).

Whether David was saying, “Hear my cry,” or “He has heard my cry,” the Hebrew word means to listen with interest and full attention. Whenever you pray, God listens to you with interest and full attention because you are praying right in His presence! Your very breath can be a continual crying, a continual lifting of your voice toward the mercyseat where God meets with you!

God is not far away from us. He is closer than we usually think. That’s why David says, “My heart leaps for joy, and with my song I praise Him”!

Keep this in mind the next time you are asking God to hear your cry: He listens to you with full attention because Jesus has taken you right into His presence.

Would you please prayerfully consider supporting this ministry?

When To Seek Consensus

David conferred with each of his officers…. He then said to the whole assembly of Israel, “If it seems good to you and if it is the will of the Lord our God…let us bring the ark of our God back to us….” The whole assembly agreed to do this, because it seemed right to all the people. (1 Chronicles 13:1-4) 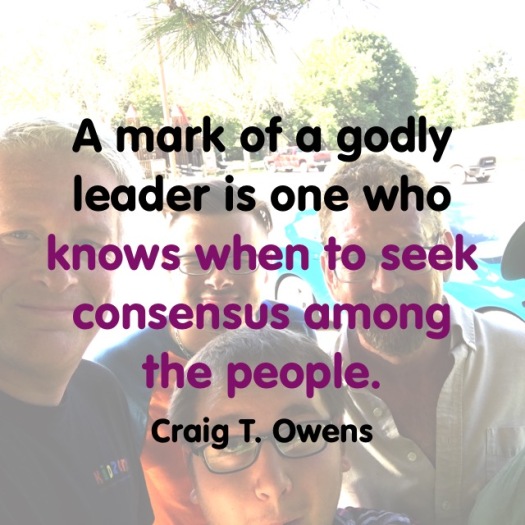 David cast a vision, consulted with his inner circle of leaders, shared the vision with the people, and got unanimous agreement from everyone.

And yet things went horribly wrong: a man was killed and David became terrified of God.

In the above verses, notice all of the plural pronouns: we and us. David worked hard to build a consensus among the people.

David was quick to notice that the ark of the covenant of the Lord wasn’t used to consult God during the reign of King Saul (v. 3), but that’s exactly what David didn’t do. He built a consensus among the people without getting a “yes” from God. Even a unanimous decision of the people will fail if God isn’t in it!

Thankfully, in chapter 15, David corrects this omission. We read phrases like:

I also notice that David no longer sought consensus but merely announced to the people what was happening. In this successful attempt to move the ark, David’s only consultation was with God. After that, he made arrangements with the Levites, gathered his inner circle of leaders, and then asked the people to join in the celebration.

God had already spoken about how the ark of the covenant was to be moved: it was written in His word. Therefore, as noble as it might sound, there was no reason for David to seek a consensus from the people.

Even if it is not an area or activity explicitly addressed in the Bible, God’s will is to be sought before others are consulted. If God says “yes,” the leader must proceed even if the people say “no.” And the leader must not listen to the people’s “yes” if God has said “no.”

Consensus is fine in its place, but only in its proper place.

A mark of a godly leader is one who knows when to seek consensus among the people.

This is part 53 in my series on godly leadership. You can check out all of my posts in this series by clicking here.

How Confident Are Your Prayers?

David hasn’t done anything wrong. He’s never tried to lead a rebellion against King Saul. In fact, he’s never even talked poorly about Saul. And yet Saul is out to kill David!

David tries to get as far away as he can, choosing to live in the desert so that he might get some relief from Saul. Still Saul comes after him with a force of 3000 men! Every time David moves, Saul’s men are hot on his trail. David described his situation like this—

My mortal enemies surround me. Their hearts are cold and calloused toward me, and they speak terrible things about me. They track me down and surround me. They are like hungry lions, crouching, waiting to pounce on me!

If you were in David’s sandals, how confident would you be that God could get you out of the situation? Remarkably, David’s confidence was as high as it could be!

David not only was confident that God would hear him, but that He would listen to him. More than that, David knew God would pay attention to him. And then David boldly said, “I call on You, O God, for you WILL answer me.”

How could David pray such a confident prayer? The answer is in this principle…

There is a direct correlation between intimacy and confidence.

David made two very intimate claims about his relationship with God: 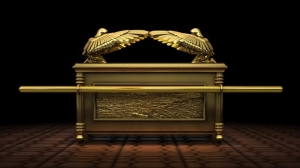 The apple of the eye is the pupil. Our eyes are amazingly designed to not only take in information but to protect themselves. If something is getting too close to our eye, the eyelids blink in protection faster than we can consciously tell them to. So David was claiming that God would protect him by reflex!

The shadow of Your wings was a reference to the top of the Ark of the Covenant; a place called the mercy seat. Here is where the priest sprinkled the blood of a sacrificial lamb to atone for the people’s sin and to appeal to God’s mercy. The mercy seat was over-shadowed by two angels’ wings.

David was saying that God kept him in this intimate place—covered by God’s mercy and protection!

Jesus also told us about intimate confidence when He said, “If you remain in Me, and My words remain in you, ask whatever you wish, and it will be given you” (John 15:7).

Are your prayers this confident? If not, don’t work on raising your confidence, but work on increasing your intimacy. Check your intimacy level with questions like:

Focus on intimacy, and then watch your confidence soar!

Do you ever get lost in the “begats” of the Bible? You know those long, tedious lists of who was born to whom? In 1 Chronicles there’s an equally long list of names that goes on for five chapters(!) of who’s in charge of what. But be careful not to skip over these lists. The Holy Spirit included them in the inspired Word of God for a reason, and sometimes you find some real gems buried in these lists.

Here are a few that I recently unearthed…

For David had said… (1 Chronicles 23:25)—David’s heart was so closely knit with God’s heart that the words he spoke were God’s words coming through David’s mouth, as he gave instructions about how worship in the tabernacle should be conducted.

David, together with the commanders of the army, set apart some of the sons of Asaph… (25:1, 3, 7)—Asaph, Hemen and Jeduthun prophesied through their singing in the tabernacle. They didn’t compose music and sing to entertain, but to call people to God. Notice, too, that all of the worship leaders in the tabernacle were “trained and skilled in music for the Lord.” Those God calls, He equips.

Hushai the Arkite was the king’s friend… (27:33)—In the listing of all the court officials, here is a man with no other title than David’s friend.

God’s Word is alive! Ask the Holy Spirit, Who inspired the men who penned these words, to give you fresh revelation as you read the Bible. Then prepare to be amazed at the gems He will reveal to you!

A Caution About Success

After King David had been firmly established as the king of Israel, he wanted to show the world how devoted he was to God, and undertook to bring the ark of the covenant to Jerusalem.

This move came after “David knew that the Lord had established him as king” and “that his kingdom had been highly exalted for the sake of God’s people” (2 Samuel 5:12; 1 Chronicles 14:2). David also asked the people about bringing the ark to Jerusalem and “it seemed right to all the people” (1 Chronicles 13:4).

Hooray! It sure sounds like David is using his new position as king to do something wonderful for his people. But…

Even with David’s knowledge that God had established him, David proceeded in a way that was displeasing to God, by attempting to move the ark in a way that God never sanctioned (2 Samuel 6:3; 1 Chronicles 13:7).

When things are going well and there seems to be a lot of positive momentum, we cannot abandon the things that brought God’s success in the first place!

CAUTION!!! We can never be too careful about inquiring of God nor consulting His Word. A danger of success is that we abandon those things which God blesses and simply ride the positive momentum of the moment. No matter how popular or obvious a thing may seem, don’t forget to pray about it and consult God’s Word about it!

Who Are You Talking To? 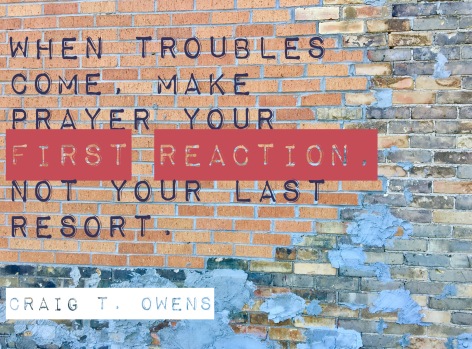 I love team leadership. I really enjoy getting a group of creative thinkers around me to do some serious brainstorming. I find it so beneficial to seek out the counsel of some wise people who have been around for a while.

But, let’s see, who have I left off this list?

Be honest: have you ever done that? Have you ever consulted with a lot of wise—even God-fearing—people, but forgotten to consult with God Himself? If you have (and I certainly have), we’re in good company.

When King David got ready to move the ark of the covenant to Jerusalem, the Bible says,

David conferred with each of his officers….

How’d that work out for him? Not so good.

Then David had his “Oh yeah!” moment. When he got ready to try again, David said,

We did not inquire of God about how to do it in the prescribed manner….

So here’s my simple reminder to myself (and to you too): It’s fine to consult with others, but consult with God first.