5 Lessons From An Amazing Mother

There is a Pentecostal Christian woman that we first meet in the Book of Acts, and then we see her name scattered throughout Paul’s letters. She may be the most prominent woman among all of the Apostle Paul’s companions and probably is responsible for spreading the Gospel more and farther than any other woman recorded in the Bible.

Scripture doesn’t tell us if she had children of her own but she is certainly the spiritual mother of more Christians than we will ever be able to count!

Prisca is her birth name. She is a Jew, and most likely a freeborn Roman (just as Paul was). She is from the prominent Acilius family, so combined with Prisca her name is called Priscilla. She married Aquila and they both worked as leather makers (also known as tentmakers).

After spending almost 2 years with Paul in Corinth, they traveled to Ephesus with Paul, where she met and mentored Apollos (Acts 18:24-26). Apollos became a trusted friend to Paul; in fact, Paul calls him a synergos (where we get our English word for synergy). In other words, Paul thought his ministry was more effective because of his partnership with Apollos, but that is all thanks to Priscilla’s involvement!

And at some point she returned to Ephesus, probably to help Timothy as he pastored the church there (2 Timothy 4:19).

Here are 5 lessons we can learn from Priscilla’s life—

We don’t know if Priscilla was a biological mom, but she was definitely a spiritual mom. She was empowered by the Holy Spirit, and probably is responsible for spreading the Gospel more than any other woman recorded in the Bible. You can follow in her footsteps!

If you missed any of the messages in this series, you can access the full list of messages by clicking here.

Now More Than Ever Christians Must Exalt The Cross

“Without freedom of religion, without a media presence, and without the ability to redress the wrongs against them, the Christians discovered that the gospel had the power to change individuals, families, and the culture.” —Dr. Erwin Lutzer, in When A Nation Forgets God (emphasis added)

Please check out my review of When A Nation Forgets God by clicking here, and then get a copy for yourself. You can also read other quotes I have shared from this book by clicking here and here.

The Key Decision For Influential Men

No matter how you look at it, being a Dad is hard work! Men have this constant balancing act between being tough and being tender. Guys have to have their game face on at work, and their family face on at home. They’ve got to work hard knocking down work competitors, and then work just as hard building up their family members.

But there is one key decision that will determine how successful a man will be at work, at home, in his social circles, and even in his relationship with God.

All of the centurions mentioned in the New Testament have noble characteristics associated with them. Whereas someone might be uncertain how a typical Roman soldier would behave, people felt more assured when the centurion was on the scene. Even Roman governors like Pilate, and Jewish kings like Herod, all seemed to fully trust the judgement, honesty, and resourcefulness of centurions.

Centurions worked hard to get where they were, and had some well-earned perks:

In order to keep this position, they would have to buy into kurios Caesar (Caesar is lord). To do otherwise was to put their position and future advancement at risk.

Yet Cornelius was different.

He was a trusted centurion, but something unusual stood out about his life. Luke the historian describes him as devout and God-fearing, mentioning his pious activities of prayer and giving to the poor. Cornelius’ own soldiers referred to him as righteous and respected by notable people in the community.

But probably most telling of all: God noticed how committed Cornelius was (see Acts 10:3-4)!

Cornelius had a lot to lose by rejecting kurios Caesar for, as the Christians said, kurios Iesous (Jesus is Lord). Yet after carefully weighing his options, he saw that trusting God was the best thing he could do for his family. His view of the eternal outweighed anything that he could gain in the temporal.

This one decision changed everything!

Because Cornelius trusted God, look at the expansiveness of his influence, not only at home, but at work, and among his friends and extended family, and throughout his community:

Fellas, you can have this same level of influence if you, too, will decide to live karios Iesous: Jesus is Lord. If you will do that, you can have said about your life what was said about Cornelius and Jesus: “God anointed ___________ with the Holy Spirit and power, and he went around doing good and healing all who were under the power of the devil, because God was with him!” (see Acts 10:38). 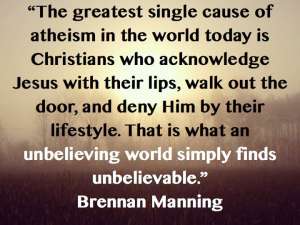 Philadelphia, as most people know is “The City of Brotherly Love.” The original Philadelphia in Asia Minor was founded in the second century BC by a man named Attalus who, quite the contrary to cultural norms, kept his brother in a position of power and influence alongside him.

Where many leaders were suspicious of anyone who could make a claim on the throne, Attalus loved (the Greek word is phileo) his brother (Greek adelphos meaning “from the same womb”), so the city took on this name and attitude as well. After the city was leveled by an earthquake in 17 AD, Emperor Tiberius sent the funds needed to rebuild. Out of gratitude to the emperor’s generosity there was a movement to rename the city Neocaesarea in his honor. But the people liked being known for their brotherly kindness, so the name Philadelphia stuck.

At least it stuck in name only. As the first century progressed, Philadelphians bowed more and more to Rome’s influence and this city once known for kindness to all began to persecute Christians.

This reminds me of the United States of America today. Our pledge of allegiance still includes “one nation under God,” and “in God we trust” is still on our currency, and we haven’t repealed the First Amendment which gives us freedom of religion. It appears that we are a “Christian nation,” but in name only.

Many cast the blame far and wide, but as Jesus addressed the people in the first city of Philadelphia (see Revelation 3:7-13), we see the blame is on those self-professing Christians who didn’t live Christ-like lives. They were Christians in name only.

For those who “have kept My Word and not denied My name” Jesus promises a list of rewards longer than the list for any of the other seven churches addressed in the book of Revelation! Those promises are still in effect for those who will not deny Christ. More specifically for those who by their words and their lifestyle hold true to Jesus Christ.

Brennan Manning was exactly right when he said, “The greatest single cause of atheism in the world today is Christians: who acknowledge Jesus with their lips, walk out the door, and deny Him by their lifestyle. That is what an unbelieving world simply finds unbelievable.”

My prayer is that Christians everywhere would be known not just by the name Christian, but by the way they hold true to Christ and His Word!

Please join me next Sunday as we look at the last of the churches in our series The 7-Star Church.