The apostle Peter said he wrote two letters to the church “as reminders to stimulate you to wholesome thinking” (2 Peter 3:1). And Paul reminded his young friend Timothy to “keep reminding [your congregation] of these things” (2 Timothy 2:14).

In the spirit of those great apostles, I have made it a practice to take time at the end of each year to look back on all that we have learned in the previous year, and then to look forward to where God may be leading Calvary Assembly of God in this upcoming year.

Clicking on each series title will take you to a list of all of the sermons in that series.

Awesome—Jesus told us that we could pray in His name and expect amazing things (see John 14:13-14, 15:16, 16:23-24). This does not mean that simply adding the phrase “in Jesus’ name, Amen” to the end of a prayer unlocks a secret code. Rather, it means that the more we understand just how awesome our Savior is, and that He is the Key to God’s storeroom, the more we will being to align our prayers with the will of God. Jesus desires for His Father’s glory to be seen on earth through the answers to our prayers. The writer of Hebrews opens his letter by reminding us that Jesus is “the radiance of God’s glory and the exact representation of His being, sustaining all things by His powerful word” (Hebrews 1:3).

Is That In The Bible? (part 1 and part 2)—A meme that makes me chuckle every time I see it is a “quote” attributed to Abraham Lincoln in which he says, “The problem with quotes found on the internet is that they are often not true.” (Not to spoil the joke for you, but unless Lincoln knew how to time travel to the future, I don’t think he knew about the modern internet!

). I love this meme because it captures something that so many people fall into: a quick acceptance of a statement without verifying its source or thinking through the implications of the statement’s truthfulness. I think you may be surprised to discover just how many phrases we call biblical aren’t, and how many phrases there are that we never realized are actually in the Bible.

Christmas Unwrapped At Easter—Remember as a kid when you would unwrap a gift and discover it wasn’t something you really wanted, but then your parents explained that it was something you needed? The birth of Jesus in Bethlehem was a little like that—it wasn’t exactly what people were hoping for, but it was exactly what they needed. The real meaning of that Christmas gift wasn’t realized until after Jesus was crucified and resurrected back to life.

We Are: Pentecostal—Pentecost for over 1500 years was a celebration in Jerusalem that brought in Jews from all over the world. But on the Day of Pentecost that came just ten days after Jesus ascended back into heaven, the meaning of Pentecost was forever changed! Followers of Jesus—now empowered by an infilling of the Holy Spirit—began to take the good news of Jesus all over the world. These Spirit-filled Christians preached the Gospel and won converts to Christ even among hostile crowds, performed miracles and wonders, stood up to pagan priests and persecuting governmental leaders, and established a whole new way of living as Christ-followers. We, too, can be Pentecostal followers of Jesus Christ today.

Selah—The word Selah appears nearly 70 times in the Bible, almost exclusively in the Psalms. Although it is primarily a musical term, it applies beautifully to our summer series. It means a pause. Throughout the Psalms, Selah appears at the end of a verse, at the end of the psalm, or sometimes even mid-sentence. But each one of them is perfectly placed by the Spirit-inspired authors to get us to take a breath and deeply contemplate what we just read or sang. 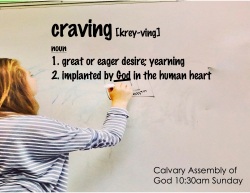 Craving—Doesn’t it seem like far too many Christians think of their relationship with Jesus as bland? After all, we’ve been told that any cravings we have should be quickly downplayed so that they don’t carry “good Christians” away. But what we discover in the Bible is that God made us to be craving creatures—He wants us to long deeply and find ultimate satisfaction for those longings. In short, God created us to long after the things that only He can fulfill. As we dive into this new series, I think you will find it quite eye-opening and heart-lifting.

The Great Attitude Of Gratitude—There’s something about gratitude that distinguishes people. Think about it: would you rather hang around with grumblers or grateful people? The gratitude of Paul and Silas certainly made them stand out from the crowd when they were in Philippi. Wrongly accused, beaten, and thrown in prison, but instead of bellyaching, they were praising God. Later on, when Paul wrote his letter to the Christians in Philippi, the theme of gratefulness permeates his letter. The distinguishing mark is actually in the title: The GReat ATTITUDE spells out GRATITUDE!

Bethlehem Is Proof—The prophet Micah foretells that the Messiah will arrive in dark times. Enemies will surround Israel, and Israel’s ruler will receive a nasty punch to the jaw. Demonic strongholds, witchcraft, and idolatry will appear to be gaining the upper hand. And then Micah turns his attention to a small village just south of Jerusalem—a village so small that it is often overlooked—a village from which no one would expect Israel’s Deliverer. And yet, Micah writes, “But you, Bethlehem Ephrathah, though you are small among the clans of Judah, out of you will come for Me One who will be Ruler over Israel, Whose origins are from of old, from ancient times” (Micah 5:2). Jesus the Deliverer was born in the little town of Bethlehem, and His birth there 700 years after Micah foretold it is our proof that God always gets the last word, the decisive word, and the best word!

We will be returning to a couple of these series in 2023, and we’ll be launching some brand-new ones as well. If you don’t have a home church in the northern Kent County area, I would love to have you join us!