Anger That Crosses The Line 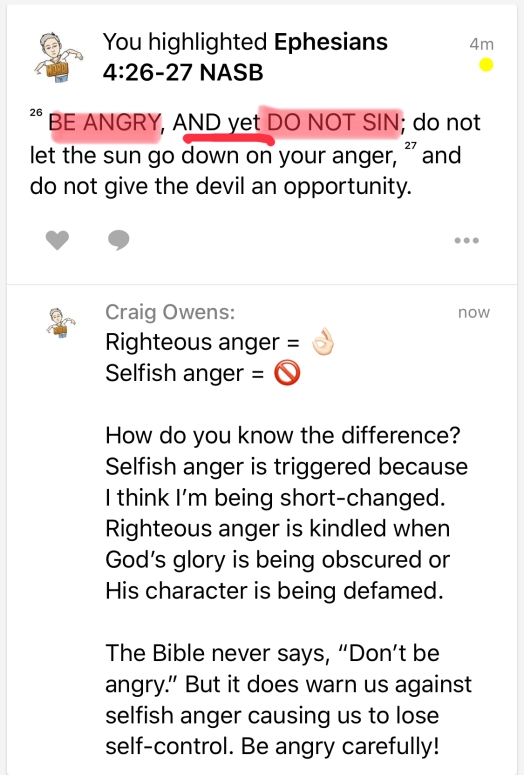 Last night in our Bible study we looked at some words that David penned when he was angry. He was on the run from his son Absalom, and it seemed like everywhere he turned people were after him, or slandering him, or just doing their best to make him miserable. Yet in two back-to-back Psalms David says, “I lay down every evening and get a great night of rest.”

His sweet sleep comes from a moment of reflection before dozing off. He says:

In your anger do not sin; when you are on your beds, search your hearts and be silent. Selah.

How do we know if our anger has not crossed that line and become sin?

Aristotle wrote, “Anybody can become angry—that is easy; but to be angry with the right person, and to the right degree, and at the right time, and for the right purpose, and in the right way—that is not within everybody’s power and is not easy.”

Being angry is not the issue. David said it (and Paul quoted it in Ephesians 4:26): “Be angry; just don’t sin.” God gets angry, but He does not sin. Jesus, in His public ministry, got angry, but He did not sin. We need to search our hearts to make sure our anger has not crossed the line to sin. We have to be angry in a godly way.

I see at least four ways to become angry without crossing the line into sin:

1.  Selfless Anger = anger at sin, but not angry at the sinner.

Love is not rude, it is not self-seeking, it is not easily angered, it keeps no record of wrongs. Love does not delight in evil but rejoices with the truth. (1 Corinthians 13:5, 6)

Do not be quickly provoked in your spirit, for anger resides in the lap of fools. (Ecclesiastes 7:9)

My dear brothers, take note of this: Everyone should be quick to listen, slow to speak and slow to become angry, for man’s anger does not bring about the righteous life that God desires. (James 1:19, 20)

Good advice from Thomas Jefferson: “When angry, count to ten before you speak; if very angry, a hundred.”

3.  Protective Anger = when sinners entice others to join them in their sin. God is sad when people leave Him; He is angry at them when they take others with them.

But they put God to the test and rebelled against the Most High; they did not keep His statutes. Like their fathers they were disloyal and faithless, as unreliable as a faulty bow. They angered Him with their high places; they aroused His jealousy with their idols. When God heard them, He was very angry; He rejected Israel completely. (Psalm 78:56-59)

4.  Righteous Anger = against those who are keeping others from coming closer to God.

For I endure scorn for Your sake, and shame covers my face. I am a stranger to my brothers, an alien to my own mother’s sons; for zeal for Your house consumes me, and the insults of those who insult You fall on me. (Psalm 69:7-9)

This verse was recalled by Jesus’ disciples when they saw Him get angry and clear out the Temple in Jerusalem. Jesus was angry because of the religious clutter that was keeping God’s house from being a house of prayer for all nations.

I think everyone is familiar with the acrostic WWJD = What Would Jesus Do?

I’d like to propose something similar: WGGA = Would God Get Angry?

This is a great question to ask to make sure our anger does not cross that line into sin. Get angry—in a godly way—and do not sin.

15 Responses to “Anger That Crosses The Line”