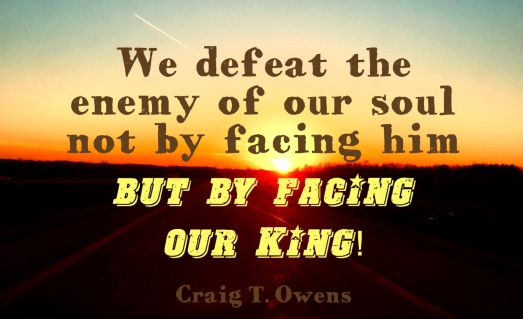 I had just finished playing three games of full-court basketball and it was time to leave for work. A young kid challenged me to stay for another game by making some comment about my old(er) age, which give me a fresh motivation to play another game. I told him I would play one more game on one condition: he had to guard me. I scored all 15 of our team’s points. One of my teammates said to that kid after the game, “You shouldn’t have made Craig angry.”

Last week Asaph told us about the boastful who say, “Hallelujah!” to themselves, and he continues with that theme in Psalm 76 by saying, in essence, “You shouldn’t have made God angry!”

Sennacherib, king of Assyria, had defeated Babylon and Egypt and had now turned his eye toward Jerusalem. He sent Lachish, his general, to deliver some stinging insults against the people of Judah and even against God Himself.

I know the Israelites had strayed from God, but the Assyrians made no pretense whatsoever to honor Yahweh, so why was God allowing them to get away with this? Doesn’t it seem sometimes like God is waiting too long to deal with these wicked insulters?

Many scholars feel that Psalm 76 was written after Sennacherib’s defeat. And make no mistake about this: it was a decisive defeat—God struck down 185,000 Assyrian soldiers while they slept! Asaph’s song of victory contains two Selah pauses, both of them intended for us to consider the greatness of Yahweh:

Look at two attacks against Jesus—

These are the only two times in the New Testament that this Greek word for “sneer” is used. It means to deride, scoff, or mock. But in the Septuagint (the Greek translation of the Old Testament) the same word that Luke used for sneer is used when God Himself says to Sennacherib, “The Virgin Daughter Zion despises you and mocks you” (see 2 Kings 19:20-28).

Sennacherib thought he was insulting God’s people, but God said, “You are really insulting Me!” Yikes—you shouldn’t make God angry!

Psalm 76 gives us the same reminder that we read in Revelation 12:10-11—“Now have come the salvation and the power and the kingdom of our God, and the authority of His Messiah. For the accuser of our brothers and sisters, who accuses them before our God day and night, has been hurled down. They triumphed over him by the blood of the Lamb and by the word of their testimony; they did not love their lives so much as to shrink from death.”

We defeat the enemy of our soul not by facing him but by facing our King!

When we are confronted by the ungodly insults from snarling, scoffing, wicked people, we must Selah to remind ourselves that Yahweh is—

Let me say it again: We defeat the enemy of our soul not by facing him but by facing THIS King of kings!

If you’ve missed any of the other messages in our Selah series, you can find the full list of those messages by clicking here.

2 Responses to “Our Glorious King”