Some good reading & watching from today…

[VIDEO] Derek Jeter has been a classy baseball player (even if he does play for the Yankees!). This Nike video tribute to The Captain is also very classy and well deserved. #Re2pect

I have to agree with this: Israel’s ‘Reasonable’ Response To Hamas.

“For real business at the mercy seat give me a homemade prayer, a prayer that comes out of the depths of your heart, not because you invented it, but because the Holy Spirit put it there. Though your words are broken and your sentences disconnected, God will hear you. Perhaps you can pray better without words than with them. There are prayers that break the backs of words; they are too heavy for any human language to carry.” —Charles Spurgeon

“Dr. Horton was a giant, not because of his impressive achievements, but because he embodied what it meant to have a servant’s heart. I pray that his legacy of godliness and servanthood live on in future generations of Pentecostal scholars.” Read more about the life of Dr. Stanley Horton.

This is a hard-hitting piece, but it is definitely on-target. Too many churches are selling out on the pro-life message. Read Faith & Forceps.

“…While man and woman are equally valuable in God’s image, and while both of them have essential and satisfying roles to play in the drama of God-exalting human life, nevertheless men bear a primary (not solitary) responsibility for leadership and protection and provision in the human race. Therefore they bear a representative role when it comes to accountability (Genesis 3:9; Romans 5:12-14). This unique calling is a responsibility to bear in sacrificial love, not a right to seize in dominating power. Where it is embraced with servantlike, Christ-honoring courage, and supported by women with faith-filled, fearless, intelligent joy, the best harmony of man and woman prevails.”—John Piper

A Mathematical Quote From Gerald Schroeder In “There Is A God” 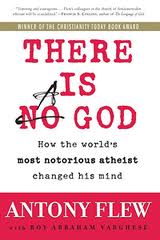 As I said in my book review of Anthony Flew’s There Is A God, the real value of this book is in the arguments which contributed to Flew’s shift from atheism to theism. You can read my full book review by clicking here.

Frankly, it’s hard to share a lot of the quotes because the context of the full argument would be lacking, but I’ve been sharing a few of them over several posts. To continue, here is an extensive quote from mathematician Gerald Schroeder, which is set up by a quote from Anthony Flew.

“Schroeder first referred to an experiment conducted by the British National Council of Arts. A computer was placed in a cage with six monkeys. After one month of hammering away at it (as well as using it as a bathroom!), The monkeys produced fifty typed pages—but not a single word. Schroeder noted that this was the case even though the shortest word in the English language is one letter (a or I). A is a word only if there is a space on either side of it. If we take it that the keyboard has thirty characters (the twenty-six letters and other symbols), then the likelihood of getting a one-letter word is 30 times 30 times 30, which is 27,000. The likelihood of getting a one-letter word is one chance out of 27,000. Schroeder then applied the probabilities to the sonnet analogy. ‘What’s the chance of getting a Shakespearean sonnet?’ he asked. He continued:

‘All the sonnets are the same length. They are by definition fourteen lines long. I picked the one I knew the opening line for, “Shall I compare thee to a summer’s day?” I counted the number of letters; there are 488 letters in that sonnet. What’s the likelihood of hammering away and getting 488 letters in the exact sequence as in “Shall I Compare Thee to a Summer’s Day?” What you end up with is 26 multiplied by itself 488 times—or 26 to the 488th power. Or, in other words, in base 10, 10 to the 690th.

‘If you took the entire universe and converted it to computer chips—forget the monkeys—each one weighing a millionth of a gram and had each computer chip able to spin out 488 trials at, say, one million times a second; if you turn the entire universe into these microcomputer chips and these chips were spinning a million times a second producing random letters, the number of trials you would get since the beginning of time would be 10 to the 90th trials. It would be off again by a factor of 10 to the 600th. You will never get a sonnet by chance. The universe would have to be 10 to the 600 times larger. Yet the world just thinks the monkeys can do it every time.’” 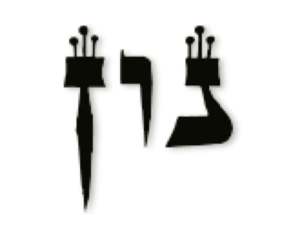 I unabashedly tell anyone who asks me what my favorite book is … It’s the Bible. I have yet to find such a collection of writings that work every single time they’re applied.

Two summers ago we began a series of messages on the 119th Psalm. It appears that the psalmist shares my passion for God’s Word, as he writes time and time again the difference Scripture makes in his life.

The other thing that makes this psalm so cool to me is the organization of the 176 verses into twenty-two 8-verse segments, with each verse in a segment beginning with the the same Hebrew letter as its title. In the Hebrew language, the letters in the alphabet had their own meaning. In English an “n” is simply spelled “n.” It has no other definition or meaning. But in Hebrew the letter nun has both a spelling and a meaning. Nun is spelled nun-vav-nun (final), and it means both faithfulness and the reward for faithfulness.

Look at the three Hebrew characters that spell nun. Reading right to left it tells a story and gives the meaning of the letter/word—the one who is humbled in faithfulness will be the one who stands in righteousness. The perfect example of this is Jesus, Who humbled Himself when He came to earth and to the Cross, and then was exalted by the Heavenly Father to wear the crown of righteousness (see Philippians 2:5-11 and Revelation 14:14). Paul starts this passage by calling on us to “have the same attitude as that of Jesus” (v. 5), and concludes with the call to stick with it all the way to the end (see vv. 12-13). 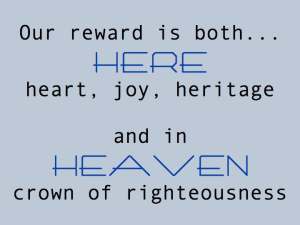 The psalmist calls us to this same thing in nun (Psalm 119:105-112). The “bookend” verses say, “Your Word is a lamp for me… so my heart is set on keeping Your Word” (vv. 105 and 112). In between the psalmist commits himself to a life of humbly persevering to God’s ways, and reaps the rewards of a changed heart, the joy of the Lord, and a heritage to pass on to others.

I have fought the good fight, I have finished the race, I have kept the faith. Now there is in store for me the crown of righteousness, which the Lord, the righteous Judge, will award me on that day—and not only to me, but also TO ALL who have longed for His appearing (2 Timothy 4:7-8).

Humble yourself before the Lord, and He will lift you up (James 4:10).

Rewards here (new heart, joy, heritage) AND rewards in Heaven (a crown of righteousness). How awesome is that!!

If you have missed any of the messages in our P119 series, you can access them all by clicking here.