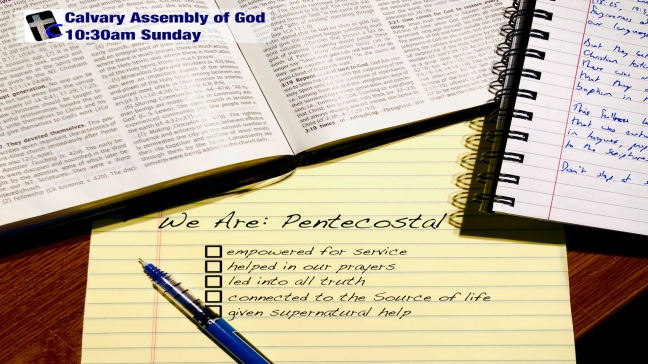 Pentecost for over 1500 years was a celebration in Jerusalem that brought in Jews from all over the world. But on the Day of Pentecost which came just ten days after Jesus ascended back into heaven, the meaning of Pentecost was forever changed!

Followers of Jesus—now empowered by an infilling of the Holy Spirit—began to take the good news of Jesus all over the world. These Spirit-filled Christians preached the Gospel and won converts to Christ even among hostile crowds, performed miracles and wonders, stood up to pagan priests and persecuting governmental leaders, and established a whole new way of living as Christ-followers.

Check out the messages in the 2022 series:

Am I Really Ready For Anything?

How many times have I told God, “I am Your servant. Use me as You know best”?

But do I really want that?

Ezekiel is told by God in the ninth year of their captivity in Babylon, on the tenth day of the tenth month, that the siege of Jerusalem had begun that very day. Ezekiel is then instructed to share this news with his fellow exiles. God tells Ezekiel that after he shares this news, he will be unable to speak until a messenger arrives in Babylon to confirm the report.

That same day, God also tells Ezekiel that his wife will die, but that he is not to mourn over this loss. God had grieved for years over Judah’s slide away from Him, but He could no longer grieve because it was now time for Judah’s punishment. Perhaps just like Judah’s slow downward slide, Ezekiel’s wife had been in declining health too, but now Ezekiel was called to obey God in this second illustrated sermon.

About seven months later, Jerusalem’s walls were broken through, King Zedekiah was captured, and about three weeks later Nebuzaradan torched the city. On that day, Ezekiel lost his power to speak, just as God said he would, and Ezekiel remained mute for nearly two years (2 Kings 25:1-10; Ezekiel 24:1-2, 15-27; 33:21-22).

This is what it means to be used by God. He used Ezekiel as His illustrated sermons to vividly show the exiles the consequences of their sinful choices.

But we don’t read a single word of complaint or bargaining from Ezekiel—just complete obedience.

A mark of a godly leader is one who signs a blank check for God to fill in the amount.

The leader that serves God in this obedient way is one who is highly esteemed by both God and men. God said, “As for you, son of man, your people are talking together about you by the walls and at the doors of the houses, saying to each other, ‘Come and hear the message that has come from the Lord.’ … When all this comes true—and it surely will—then they will know that a prophet has been among them” (Ezekiel 33:30, 33).

I want to believe that I am willing to serve God this way but am I truly willing? Perhaps my prayer should be, “Father I want to be able to be used by You. I want to say that I am ready for You to use me as You see best. But You alone truly know my heart. Holy Spirit, if I am not as committed as Ezekiel was, please do Your work in me so that I can truly say, ‘I am ready to be used.’”

This is part 63 in my series on godly leadership. You can check out all of my posts in this series by clicking here.