4 Quotes On Persecution From “The Blessing Of Humility”

As I stated in my review of Jerry Bridges’ book The Blessing Of Humility, reading through these thoughts slowly—Beatitude by Beatitude—would bring about the most life-changing impact. In that spirit, I will be sharing some noteworthy quotes one Beatitude at a time. Here are some quotes on blessed are those who are persecuted because of righteousness (Matthew 5:10-12)…

“There is no doubt that the culture is becoming more and more antagonistic toward biblical values. For some years I have thought our American culture to be ungodly; that is, to believe and act as if God is irrelevant. Now I believe we have become not just ungodly but actually anti-God. An increasing number of those who most influence our culture—such as academia, the media, and the entertainment industry—are openly hostile to the whole idea of God or of biblical values.”

“I suspect that our own court system will eventually fail us, as more and more judges are appointed who have been trained in law schools that at best are indifferent to biblical righteousness and at worst are openly hostile to it. Even our Supreme Court seems to be rendering decisions based on the mores of popular culture rather than on a principled application of the Constitution.”

“Keep in mind these words from Jesus [Luke 6:27-28] are precepts—authoritative commands of God. Furthermore, they address more than our attitude toward those who persecute us. They are action steps: we are to love our enemies, do good to them, bless them, and pray for them.”

I have previously shared quotes on:

The Delight In God’s Word 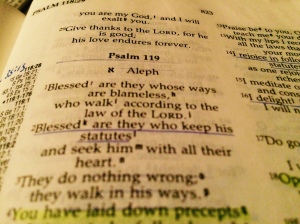 Psalm 119 is a loving poem to God because His Word to us is so amazing! All 176 verses of this psalm say something special about God’s laws, statutes, decrees, precepts, or commands.

Oh, how wonderful is God’s Word!!