10 More Quotes From “The Christian In Complete Armour” 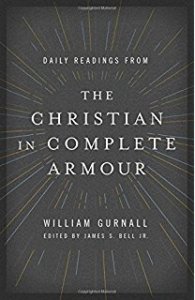 William Gurnall penned wise words for Christian warriors nearly 400 years ago, but their timelessness is still evident today. Check out a few more quotes from The Christian In Complete Armour.

“When we consider satan’s many years of experience in studying natural knowledge, we will not accept his predictions as prophecies but see him as a learned naturalist with a short and dark text of natural causes. … Neither satan nor any other creature is able to foretell events which do not arise from natural causes nor follow moral and political probabilities. Prophecies in Scripture are locked up in the cabinet of the divine will to prove their heavenly extraction. They must come from God, Who can tell us what only He knows.”

“Look closely at the label to see whether the armor you wear is the workmanship of God or not. There are many imitations on the market nowadays. It is satan’s game, if he cannot keep the sinner satisfied in his naked, lustful state, to coax him into some flimsy thing or other that by itself will neither do him good nor satan harm. Perhaps it is church attendance, or good works, or some self-imposed penance by which he intends to impress both God and man. … Thus thousands perish who supposed they were armed against satan, death, and judgment—when all along they were miserable and naked. … God’s armor can never be made to fit over the suit [a self-satisfied man] has fashion for himself.”

“Knowledge is to faith as sunshine is to the farmer. Without it, faith cannot see to do her work. Nor can the work, once finished, be adequately inspected in the dim light of half-truths. If you do not ground yourself in the truth of the Gospel, satan will play upon your ignorance to thwart your spiritual growth.”

“You give satan a dangerous advantage if you see his wrath and fury bent in general against the saints, and not against you specifically: satan hates me; satan accuses me; satan temps me. Conversely, you lose much comfort when you fail to see the promises and providences of God as available for your own specific needs: God loves me; God takes care of me.”

“Until the love of a sin is quenched in the heart, the fire will never die out. How is this accomplished? Jerome says one love extinguishes another—that is, the love of Christ must quench the love of sin.”

“If you are a Christian, what is there to fear? You have no life to lose if you have already given yourself to Christ. And while God has not promised immunity from suffering, He has undertaken to bear your losses and pay you a hundredfold, though your reward may not come until another world.”

“A thief has no legal right to the wallet he takes from his victim simply because he puts it in his pocket and claims it is his own. Nor is the wrong thus committed ever made right by the passing of time. Years may go by before he is discovered; he will be as guilty on the day of his arrest as on the day he perpetrated the crime. Now a thief on the throne is no different from one in the alley. satan has indeed kept his stolen title a long time, but he is no less a criminal than on the day he first took Adam’s heart from God.”

“I grieve to see the soul fallen so far beneath its divine origin! The body, which was intended to be its servant, has instead become its master, and rules with a merciless hand.”

“When you cause anyone to sin, you take the devil’s office out of his hands. Let him do it himself if he can, but never allow him to use you as his hireling. Tempting someone else to sin is worse than sinning yourself. Those who tempt others plant their own wickedness in fertile fields and raise up new seed to the devil.”

“One reason we are so easily persuaded to sin is because we do not understand satan’s purpose. … Shall I tell you? Do you think your pleasure or profit is his goal? Not likely! His aspirations are all for himself. He has a personal grudge against God, and he brings you, by sinning, to join his quarrel. What he fails to mention is that you jeopardize your very soul to defend his pride and lust. But he is hardly worried about your welfare. He loses no more sleep over your certain damnation than a demented general does over the men he sends on a suicide mission. Knowing this, why would you ever join satan in his fight against God?”

You can read my full review of William Gurnall’s book by clicking here. I have shared other quotes from The Christian In Complete Armour here, here, and here.

Live Dead is a call to missionaries to leave the comfortable and the familiar behind to take the message of Jesus where it hasn’t been taken before. In Live Dead Journey you will see twelve different mission fields in the Arabic world through the eyes of Live Dead personnel who are living and serving in those cities.

In each of twelve stops, you will have a fantastic tour of a key city in the Arabic world. Then you will hear from each of these missionaries how they are empowered to minister in such challenging fields. Each of them credits abiding time with Jesus, but they will share with you how this is personalized to each of them, in fitting with their own personality and temperament.

Live Dead is not to be undertaken lightly, but it’s an all-in commitment. “If we are to finish the task, there will be a cost. It will take blood and boldness, sweat and suffering, tears and tenacity. Some will be imprisoned, some will die, some will spend a lifetime of labor with little credit and little reward. All will have to live dead.” But the eternal rewards are so worth it!

Although this book is featuring the Arabic world, any Christian who desires to make an impact in his or her community will find ample encouragement in the words of these front-lines missionaries. As an added benefit, you will also know how to pray for and support these Live Dead missionaries.

I am a Live Dead Publishing book reviewer.