A Dozen Quotes From C.S. Lewis 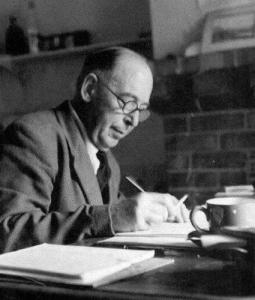 Whenever is it not a good time to read some amazing insights from C.S. Lewis?

“A live body is not one that never gets hurt, but one that can to some extent repair itself. In the same way a Christian is not a man who never goes wrong, but a man who is enabled to repent and pick himself up and begin over again after each stumble—because the Christ-life is inside him, repairing him all the time, enabling him to repeat (in some degree) the kind of voluntary death which Christ Himself carried out.” —C.S. Lewis

“About the general connection between Christianity and politics, our position is more delicate. Certainly we do not want men to allow their Christianity to flow over into their political life, for the establishment of anything like a really just society would be a major disaster. On the other hand we do what we want, and want very much, to make men treat Christianity as a means; preferably, of course, as a means to their own advancement, but, failing that, as a means to anything―even to social justice.” ―C.S. Lewis

[Kathleen pointed out to me that this quote should be attributed to Samuel Johnson. This phrase was used by Lewis in a letter, and I had assumed it was original to him. Thank you, Kathleen! So below is a replacement quote to keep the even dozen of quotes in this post.]

“Christianity is not merely what a man does with his solitude. It is not even what God does with His solitude. It tells of God descending into the coarse publicity of history and there enacting what can—and must—be talked about.” —C.S. Lewis

“We all want progress. But progress means getting nearer to the place where you want to be. And if you have taken a wrong turn, then to go forward does not get you any nearer. If you are on the wrong road, progress means doing an about-turn and walking back to the right road; and in that case the man who turns back soonest is the most progressive man.” ―C.S. Lewis

“Pride is essentially competitive. … Marriage heals this. Jointly the two become fully human. … Pride is spiritual cancer: it eats up the very possibility of love, or contentment, or even common sense.” ―C.S. Lewis

“Pleasure in being praised is not Pride. The child who is patted on the back for doing a lesson well, the woman whose beauty is praised by her lover, the saved soul to whom Christ says ‘Well done,’ are pleased and ought to be. For here the pleasure lies not in what you are but in the fact that you have pleased someone you wanted (and rightly wanted) to please. The trouble begins when you pass from thinking, ‘I have pleased him; all is well,’ to thinking, ‘What a fine person I must be to have done it.’ The more you delight in yourself and the less you delight in the praise, the worse you are becoming.” ―C.S. Lewis

“Prosperity knits a man to the World. He feels that he is ‘finding his place in it,’ while really it is finding its place in him.” ―C.S. Lewis

“We live, in fact, in a world starved for solitude, silence, and privacy, and therefore starved for meditation and true friendship.” ―C.S. Lewis

“In fact, however, the value of the individual does not lie in him. He is capable of receiving value. He receives it by union with Christ.” ―C.S. Lewis

“In science we have been reading only the notes to a poem; in Christianity we find the poem itself.” ―C.S. Lewis

“Now repentance is no fun at all. It is something much harder than merely eating humble pie. It means unlearning all the self-conceit and self-will that we have been training ourselves into for thousands of years. It means killing part of yourself, undergoing a kind of death. In fact, it needs a good man to repent. And here comes the catch. Only a bad person needs to repent: only a good person can repent perfectly. The worse you are the more you need it and the less you can do it. The only person who could do it perfectly would be a perfect person―and he would not need it.” ―C.S. Lewis

3 Responses to “A Dozen Quotes From C.S. Lewis”