Talk about taking a passing remark out of context! In a personal letter, Thomas Jefferson mentions how church and state should be separate. But I’m convinced where we’ve ended up is no where close to what he intended! I’m so tired of historical revisionists trying to convince us that biblical values and Judeo-Christian ethics had no place in the founding of our nation. Or — worse yet — that they have no place now. Consider these founding remarks…

“…Having undertaken, for the Glory of God, and advancements of the Christian faith and honor of our King and Country, a voyage to plant the first colony in the Northern parts of Virginia….” — Mayflower Compact

“And for the support of this Declaration, with a firm reliance on the protection of Divine Providence….” — Declaration Of Independence

“I have lived, Sir, a long time; and the longer I live the more convincing Proofs I see of this Truth, That God governs in the Affairs of Men! — And if a Sparrow cannot fall to the Ground without His Notice, is it probable than an Empire can rise without His Aid? — We have been assured, Sir, in the Sacred Writings, that ‘except the Lord build the House, they labor in vain that build it.’ I firmly believe this; and I also believe that without His concurring Aid we shall succeed in this political Building no better than the Builders of Babel…. I therefore beg leave to move, That henceforth Prayers, imploring the Assistance of Heaven, and its Blessing on our Deliberations, be held in this Assembly every Morning before we proceed to Business.” — Benjamin Franklin, Constitutional Convention

“It is impossible to rightly govern a nation without God and the Bible.” — George Washington

“Suppose a nation in some distant Region should take the Bible for their only law Book and every member should regulate his conduct by the precepts there exhibited! What a Utopia, what aParadise would this region be.” — John Adams

And, of course, the quotes could go on and on and on. But one of my favorites:

“Yes, if our religion had more to do with our politics; if, in the pride of our citizenship, we had not forgotten our Christianity; if we had prayed more and wrangled less about the affairs of our country, it would have been infinitely better for us at this day.” — John Mitchell Mason (1770-1829), in his book published in 1800 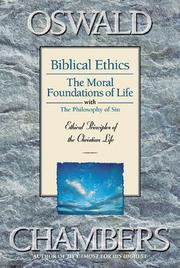 Like every book from Oswald Chambers, be prepared for Biblical Ethics to hit you right between the eyes! In my lifetime the term ethics has had so many qualifiers added to it –

…as though ethics becomes something changeable if you are in a difficult situation. But in clear, unequivocal language, Oswald Chambers brings all ethics back to the Bible.

END_OF_DOCUMENT_TOKEN_TO_BE_REPLACED

I really appreciate the research that The Barna Group undertakes. I always find such timely insight into the mindset of people’s attitudes on matters of church and religion.

Their annual year-end report reveals the “megathemes” that they have observed emerging throughout the year. I encourage you to read the full article for yourself by clicking here, but the six megathemes for 2010 are:

At Calvary Assembly of God, we’ve been streamlining our ministries to help us address these megathemes.

What do you think about Barna’s Megathemes?

If you are a pastor or church leader, how do you plan to engage these megathemes in 2011?