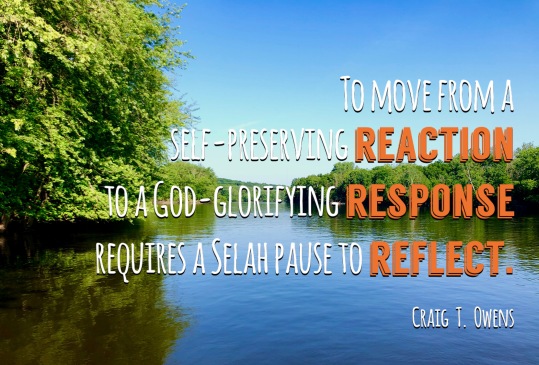 David taught us how to pray after we’ve been stabbed in the back. Aren’t you glad that you can pray this prayer just once and everything is all better?!

Oh, wait. It doesn’t really work that way, does it? At least it hasn’t for me. After I’ve been hurt, it takes quite a while to get to a place of healing. We have cliches for this sort of thing—phrases like “Once bitten, twice shy” and “Fool me once, shame on you; fool me twice, shame on me.”

We begin to react to the past instead of reflecting and responding in the present.

It’s interesting that those who compiled the Psalter placed Psalm 55 where they did. There is no introduction that gives us a background or setting, but David still seems to be looking for those “Ziphites” that betrayed him to King Saul.

Here’s an important physiological and psychological truth: Our brains cannot tell the difference between a real threat and an imagined threat. Our physical bodies react the same way in response to any threat.

It’s interesting to note that both Selahs in Psalm 55 are in the middle of a sentence, almost as if David is interrupting his own thoughts. Which, I believe, is exactly what he’s doing.

As this psalm opens David is still praying, but he’s praying about his internal threats:

This leads to David’s fight/flight response (although really, it’s his flight response): “Oh, that I had the wings of a dove! I would fly away and be at rest—I would flee far away and stay in the desert.”

David has been listening to himself, and he finally at least attempts to put a halt to these distressing thoughts with his first Selah—which means “pause, and calmly think of that.”

Most of our natural reactions are driven by fear. But fear—by its very nature—is limiting. Fear keeps us tunnel-visioned on the perceived threat. Fear closes us off to accepting any new information. Fear limits our creative responses. Fear perpetuates more fear.

So David tries a second time to Selah. He is attempting to interrupt his negative thoughts—to stop listening to himself and start talking to himself. To move from a self-preserving reaction to a God-glorifying response requires a Selah pause to reflect. Reflecting on things like:

I love David’s conclusion: “But as for me, I TRUST IN YOU.” He’s saying, “I’m not going to listen to those negative fears anymore. It’s time to put my trust in God.”

David had to do this “evening, morning, and noon”—again and again and again! Until finally he could say, “I will cast all my cares on the Lord and He will sustain me; He will never let me fall” (Psalm 55:22).

This is what Jesus promises us, “Come to Me, all of you who are tired and have heavy loads, and I will give you rest” (Matthew 11:28).

If you’ve missed any of the messages in our Selah series, you can access them all by clicking here.