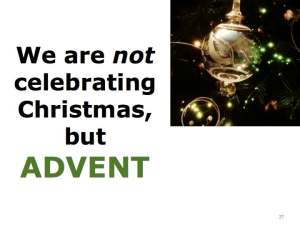 We began our series on The Carols Of Christmas by looking at the poem written by Charles Wesley in 1744: Come, Thou Long-Expected Jesus. As far as I can find, Wesley never shared where he got his inspiration for this prose, but I have a hunch that it might be from a song in the Bible called The Benedictus.

Zechariah had been unable to speak for nearly a year because of his doubt over the message God sent him through the angel (see Luke 1:5-20). When his son was born and Zechariah named him John, his tongue was loosed and he “was filled with the Holy Spirit” and burst into song (Luke 1:67-79). The first word of his song in Latin is benedictus, from which the name is derived.

Here’s what I love about both Zechariah’s and Wesley’s songs—they both look forward to Christ’s First Advent and His Second Advent. Mary was still pregnant with Jesus when Zechariah sang his song, but his lyrics reflect the Redemption story that Jesus would fulfill as Emmanuel, God with us. Charles Wesley picks up this same theme, rejoicing over Christ’s birth and His imminent return.

In fact, that’s exactly the point! We aren’t celebrating Christmas as much as we are celebrating Advent. Jesus was born “when the time had fully come” for His First Advent (Galatians 4:4-5), and “this same Jesus, Who has been taken from you into Heaven, will come back in the same way you have seen Him go into Heaven” (Acts 1:11). That’s the message that should encourage us (see 1 Thessalonians 4:13-18). 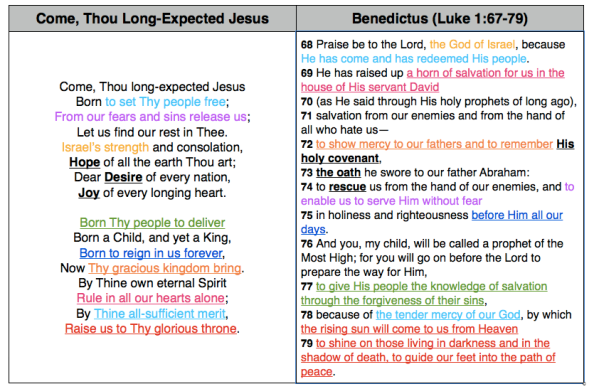 If you’d like to download a PDF of this side-by-side comparison, here it is → Come Thou Long-Expected Jesus & Benedictus ←

We are continuing our series on the rich, meaningful messages in the familiar Christmas carols next Sunday, and I’d love to have you join us!

2 Responses to “Come, Thou Long-Expected Jesus”