Leaders teach, and encourage, and train, and correct, and sometimes even warn. But despite all of this effort sometimes people still do wrong—and even sinful—things. And sometimes there are consequences for these poor choices that even a leader cannot deflect away from them.

Godly leaders say, “How can I serve you?”

The Israelites grumbled against God, and God was angry. It would have been understandable if Moses would have said, “You complained so you’re going to have to bear the consequences.” But instead, Moses interceded before God on their behalf (Numbers 11:1-2).

The people rejected God as their King and chose instead a man named Saul to lead them. Samuel could have said, “You’re in big trouble now!” But instead, he said, “Far be it from me that I should sin against the Lord by failing to pray for you” (1 Samuel 12:23).

What about you? Have you ever grumbled against God or chosen a path that wasn’t best for you? Jesus could say, “Well, you should have known better!” But instead, we read that He intercedes before God’s throne on our behalf (Job 9:33-34; Hebrews 4:15-16; 7:25).

The mark of a godly leader is one who intercedes for his people.

If you are a Christ-follower and you are a leader of people, then follow Christ’s example. Yes, continue to teach, encourage, train, correct, and warn. But if people mess up, don’t write them off; instead, intercede before God on their behalf!

This is part 32 in my series on godly leadership. You can check out all of my posts in this series by clicking here. 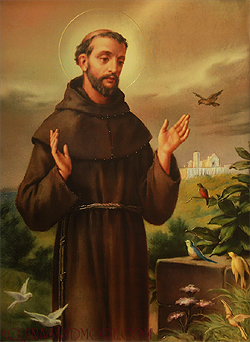 Does it seem like many people substitute “Happy holidays” for “Merry Christmas”? Or that more and more people prefer spelling it “X-mas” instead of Christmas?

This isn’t something new in our culture. Francis of Assisi dealt with this same situation in the 12th century.

“Many people spell Christmas without Christ, the glory of a Holy Day being supplanted by the glitz of a holiday—a problem that reaches back to the days of St. Francis of Assisi.

“Francis was born in 1182 in central Italy, son of a rich merchant. After a scanty education, he joined the army and was captured in war. He came to Christ shortly after his release, and soon he began traveling around the countryside, preaching the gospel. At a February 1209 Mass, Francis was gripped by words being read from Matthew 10: As you go, preach this message: ‘The kingdom of heaven is near.’ Heal the sick, raise the dead, cleanse those who have leprosy, drive out demons. Freely you have received, freely give. Do not take along any gold or silver or copper in your belts; take no bag for the journey, or extra tunic, or sandals or a staff … (NIV).

“Francis felt that Christ Himself was speaking directly to him. He decided to obey those words as literally as possible, preaching the kingdom and possessing nothing. It is as though a 1,200-year bridge were crossed, putting Francis in the shoes of the original wayfaring apostles themselves.

“He spent his remaining days making Christ real to everyone he met—a passion leading to history’s first living nativity scene. On December 24, 1223, Francis found a cave near Greccio, Italy, and brought in animals traditionally associated with the birth of Christ. (Francis loved animals and sometimes even preached to them.) He built the crib, arranged the hay, and finished the scene. Crowds gathered full of curiosity and wonder; and there on Christmas Eve Francis preached the wonder of God made man, born a naked infant and laid in the manger. ‘Behold your God,’ he said, ‘a poor and helpless Child, the ox and donkey beside Him. Your God is of your flesh.’

“Glitz gave way to glory that evening as the people of Greccio learned afresh how to spell the word Christmas.” —From On This Day

This Advent season, let us remember that there is no Christmas without Christ!