Some good reading and watching from today…

“I set you down as nearer akin to a devil than to a saint, if you can go your way and look into the face of your friend or child, and know him to be on the downward road, and yet never pray for him nor use any means for his conversion.” —Charles Spurgeon

Truth: 5 reasons why church is good for your marriage.

“Surely you know that if a man can’t be cured of churchgoing, the next best thing is to send him all over the neighborhood looking for the church that ‘suits’ him until he becomes a taster or connoisseur of churches.” —C.S. Lewis, in The Screwtape Letters

When doctors given expectant parents about a health issue for their baby, that information may be misleading.

…but there is no mistaking this abortionist’s vile confession: “we let babies born alive ‘expire.’”

Yet again climatologists’ “models” of so-called global warming are destroyed.

[VIDEO] John Piper on what it means to be Gospel-centered…

Gary Wilkerson gives us a behind-the-scenes look at the life of his father in this very readable and heartwarming biography of David Wilkerson.

When I read the story of David Wilkerson taking the gospel of Jesus Christ to the gangs of New York in the book The Cross And The Switchblade, I was absolutely mesmerized! Here was this country preacher from Pennsylvania confronting some of the toughest gang members all alone on the streets of New York City … wow!

I had visions of a man with a commanding physical presence, a man who was so confident in what God had called him to do, and a man who had an unshakable faith in God. So when I picked up this biography, I was prepared to meet this giant of a man. Instead I found someone who was, in a word, real. He wasn’t physically imposing, he struggled with God’s calling on his life at times, he worked himself almost to exhaustion, he made mistakes, and he sometimes doubted if what he was doing was making a lasting difference.

But in one facet my youthful impression was correct: David Wilkerson was a man of unshakable faith in God. Even in moments where he battled depression and his own shortcomings, he never wavered in his clinging to God.

Gary Wilkerson tells this life story of his Dad lovingly and honestly. He shows us so clearly how God can use a real man, with all of his faults and shortcomings, if that man will simply remain surrendered to God’s will.

This is a highly encouraging biography! I would especially recommend this to anyone who was as thrilled with The Cross And The Switchblade as I was, because I believe it will give you a whole new level of appreciation for the amazing work God did through David Wilkerson’s life.

I am a BookLook book reviewer. 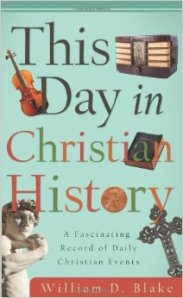 For history buffs, This Day In Christian History by William D. Blake is a great book to keep handy all throughout the year. Each day you will find two historical items which have had a lasting impact on church history.

The two calendar items each day will take less than 60 seconds to read, but I found that on many days it opened the door of curiosity for me to do some additional research on that event or person. You will also find:

A very fun book to read each day of the year.