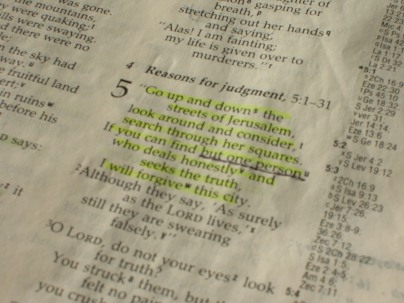 “If you can find but one person who deals honestly and seeks the truth, I will forgive this city” (Jeremiah 5:1).

Through just one person’s pursuit of righteousness, God will save an entire city! One person.

“When I was young and free my imagination had no limits, I dreamed of changing the world. As I grew older and wiser, I discovered the world would not change, so I shortened my sights somewhat and decided to change only my country. But it, too, seemed immoveable. As I grew in my twilight years, in one last desperate attempt, I settled for changing only my family, those closest to me, but alas, they would have none of it. And now as I lie on my deathbed, I suddenly realized: If I had only changed myself first, then by example I would have changed my family. From their inspiration and encouragement, I would have been able to better my country and, who knows, I may have even changed my world.” —Written on the Westminster Abbey tomb of an eleventh-century Anglican bishop

God is looking for just one in your family. Will you be that one?

God is looking for just one in your city. Will you be that one?

God is looking for just one at your work. Will you be that one?

It takes just one for God to do something amazing—just one.

Please, be that just one.

4 Responses to “Just One”