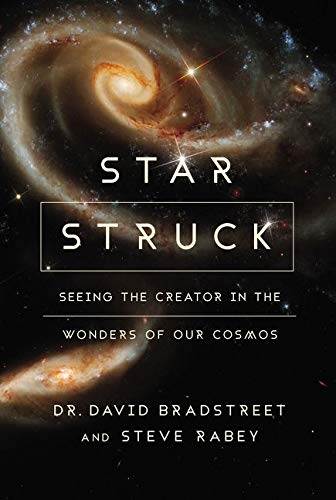 Because of my science background, I’m always fascinated by the discoveries of scientists that bring glory to God. So I was drawn in especially by the subtitle of Dr. David Bradstreet’s book Star Struck: Seeing The Creator in the Wonders of Our Cosmos.

This book is part autobiographic in how Dr. Bradstreet got into astronomy, part historical as he walks us through the advancements in the study of the heavens, and part devotional as he attempts to tie in biblical passages with these fascinating astronomical discoveries. But for me, this attempt to be all-encompassing didn’t “scratch the itch” that I thought it would when I first saw the subtitle. I think I would have appreciated it more if this were presented as three books: memoir, history, and devotional.

For me, the best part of Star Struck was the history of astronomy. Hearing from an astronomer how his predecessors thought, reasoned, hypothesized, and then presented their findings to an often skeptical world (and usually an even more skeptical church) was quite fascinating. I especially enjoyed some of the many tidbits about stars and planets, particularly the look at our Sun, Earth, and Moon.

I would not, however, recommend this book as a means to understand how astronomy shines such a clear light on the majesty of the Creator seen in the pages of the Bible, as I found that attempt quite lacking.

As a pure astronomy history book, Star Struck is a great read for anyone, from students to adults.