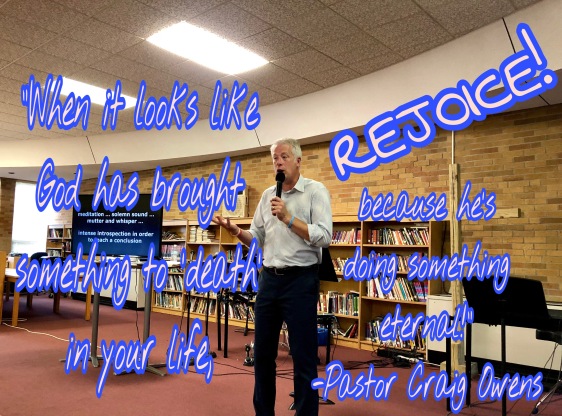 Well, this isn’t what I expected! David says his song in Psalm 9 is supposed to be sung to the tune of “Death Of The Son,” so I’m expecting a prayer that is loaded with minor notes. But instead, David gives us … this!

The opening verses show us David exploding in praise to God. Check out his vocabulary—

Why this loud, exuberant, unexpected praise? Because David has noticed that whatever has “died” on earth is only a temporary loss, but God is forever!

There is an unusual word pairing at the end of verse 16: Haggaion and Selah. This is the only time these two words appear like this in all of Scripture, and it’s also the only time Haggaion is used without being translated.

By combining Haggaion and Selah, David is wanting us to solemnly meditate on an important contrast: God’s way vs. man’s way. In verses 3-16, David uses huge and eternal terms for God like righteous Judge, reigns forever, refuge, stronghold, merciful, and prayer-answerer.

Side-by-side with these eternal terms for God, David lists the temporary terms for man like stumble, perish, ruined, forgotten, and trapped. In fact, David ends this Psalm by reminding us evil men who do evil things are “mere men.” Other translations fill in the details:

Then David ends with a final Selah—one more call for us to allow this message to resonate with us, especially during the times others may call dark, depressing times. The message that should resonate in our hearts and cause us to throw our hands up in joyful celebration of God is…

When a dark time—a “death of a son”—tries to rock your world, don’t do what puny mortals expect, but throw your hands up in the air, and sing and roar a praise to the Almighty God Who cares for you!

Join me this coming Sunday as we continue our looks at the Selahs in the Book of Psalms. You can join me in person or on Facebook Live.