40 Questions About Your Religion 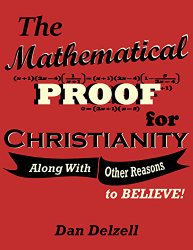 Dan Delzell wrote a very thought-provoking book—The Mathematical Proof For Christianity—which gives skeptics a lot of evidence to contemplate. As I said in my review of this book (which you can read here), this is a good book for Christians to read with a skeptic as a great conversation-starter about the Christian faith.

“The true religion is a match to all 40 questions:

To read some of the other quotes I shared from this book, please click here.

2 Responses to “40 Questions About Your Religion”