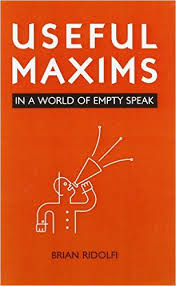 I have already shared two sets of maxims from Brian Ridolfi’s great book Useful Maxims (you can read them here and here). These are some additional maxims targeting particular topics…

To read some of the other quotes from Useful Maxims that I am sharing, be sure to follow me on Twitter and on Tumblr, and check out my review of Useful Maxims here.