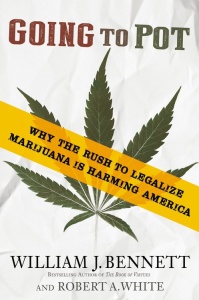 I have been concerned for some time about the pro-legalization (or de-criminalization) movement throughout our country. There seems to be haste to un-do the laws that have served our nation well for many, many years. One especially troubling aspect is expertly addressed in Going To Pot: Why the rush to legalize marijuana is harming America by William Bennett and Robert White.

One by one, Bennett and White dismantle each of the pro-legalization arguments that are being promoted. And these gentleman are truly in a position to speak authoritatively: William Bennett has served as the Drug Czar and as the Secretary of Education (both Cabinet-level positions), and Robert White served as an Assistant US Attorney. In short, these guys know what they’re talking about!

Bennett and White systematically lay out each argument, and then share the facts which completely destroy the arguments. They talk about drug policies that haven’t worked internationally, and they also show the failure of the legalization of marijuana within our own borders. In addition, they also lay out a very thoughtful plan for our country going forward.

This topic is going to continue to come up for a vote on the State-level, so concerned citizens should read Going To Pot to arm themselves with the facts that will contradict the hype and rhetoric of the pro-marijuana crowd.

I am a Center Street book reviewer.