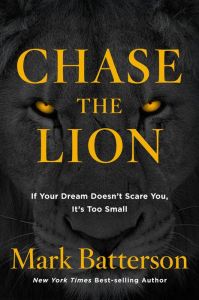 There is always something about a Mark Batterson book that motivates me to do even bigger things. But Chase The Lion took that to a whole new level!

Chase The Lion is sort of the sequel to In A Pit With A Lion On A Snowy Day. In the first book, Batterson looked at the life of Benaiah, who was a lion killer. In Chase The Lion, we go deeper into Benaiah’s motivation. What motivates a man to run toward the roar? Is he a unique individual, or can others do what he did?

Pastor Batterson then broadens his circles by looking at the other Mighty Men who, along with Benaiah, were attracted to King David. What brought these courageous warriors together? What kept them together? What were they fighting for?

Then skillfully Mark weaves together his own lion-chasing journey, with other historic characters, as well as those mighty men surrounding King David. Time and time again Mark challenged me to be disenchanted with the status quo, to dream bigger dreams, to try more courageous things, to see that my life is not just lived for me. The life I live is made possible by other lion-chasers who came before me, and the way I live my life will make it possible for still more lion-chasers to follow my example.

Before getting to chapter one I read “The Lion Chaser’s Manifesto” and I was already fired up to read and learn more. The rest of the book was chapter after chapter of new inspiration and encouragement.

What an amazing book! I can’t recommend Chase The Lion enough to anyone who wants to do great things, and leave a legacy of greatness for generations to come.

I am a Multnomah book reviewer.