5 Quotes From “Questions Christians Hope No One Will Ask” 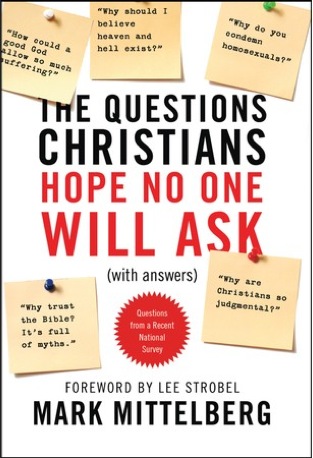 Earlier this week I reviewed Questions Christians Hope No One Will Ask Them (you can read my review here).

I wanted to share some of my favorite quotes from this book:

“When we fail to answer someone’s questions and objections, we become just one more excuse for them to disbelieve.” —Walter Martin

“I cannot believe that our existence in this universe is a mere quirk of fate. … We are truly meant to be here.” —Paul Davies, a physicist, cosmologist, and atheist

“Here’s the key point to remember: there never was a time when the earliest community of followers of Jesus did not regard Him as far, far more than a good teacher.” —Mark Mittelberg

“If a good God made the world, why has it gone wrong? … My argument against God was that the universe seemed so cruel and unjust. But how had I got this idea of just and unjust? A man does not call a line crooked unless he has some idea of a straight line. What was I comparing this universe with when I called it unjust? If the whole show was bad and senseless from A to Z, so to speak, why did I, who was supposed to be part of the show, find myself in such violent reaction against it? … Thus in the very act of trying to prove that God did not exist—in other words, that the whole of reality was senseless—I found I was forced to assume that one part of reality—namely my idea of justice—was full of sense. Consequently, atheism turns out to be too simple. If the whole universe has no meaning, we should never have found out that it has no meaning: just as, if there were no light in the universe and therefore no creatures with eyes, we should never know it was dark. Dark would be without meaning.” —C.S. Lewis