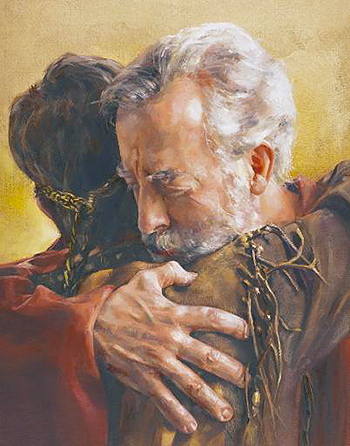 I’m still thinking about the powerful worship time we had in our Impact youth service on Wednesday night. I can’t think of another way to describe it, except to say that it was intimate.

We sang a song written by Michael Gungor called Wrap Me In Your Arms. The lyrics are simple:

Far too many people view God as a Judge. Make no mistake, God will judge all of humanity at the end of the age, but in the meantime, Scripture portrays God as a loving Father who wants to wrap us in His arms.

I love the picture in the story Jesus tells of the prodigal son: The young man who ran away from his father and squandered all of the wealth he had taken with him. When he reached the end of his rope, the wayward son turned toward home. If you were thinking of returning home after embarrassing your father and throwing away his money, would you want to return to a judge or a father?

The young man did turn toward home, and his father ran to him and wrapped him in his arms! How amazing!

On Wednesday night I encouraged our youth group to simply stretch their arms out toward their Heavenly Father and feel Him wrap them in His arms. It was so special to see tear-streaked cheeks and outstretched arms in the loving embrace of a God who loves anyone who turns to Him. Awesome!

I encourage you to do the same.

If you wait until your life here is over without ever turning to God, then you will have to face God the Judge. Don’t wait! Embrace God your Father today.