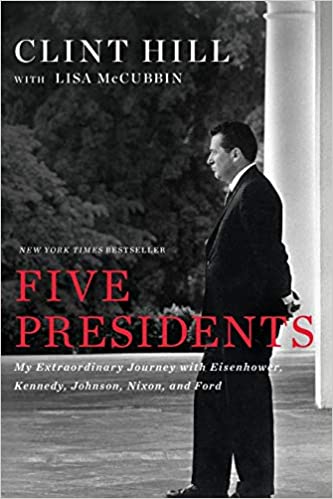 Mr. Hill was on the presidential protection detail for Presidents Dwight Eisenhower, John Kennedy, Lyndon Johnson, Richard Nixon, and Gerald Ford. During his time, America experienced several “firsts” and Mr. Hill was right there to see them firsthand. During this time in our country’s history, only one of these presidents was elected, reelected, and finished both of his terms as president: Dwight Eisenhower. President Kennedy was assassinated, President Johnson finished JFK’s term but withdrew from running for reelection, President Nixon resigned during his second term, and President Ford became the only president to serve as both president and vice president without being elected to either office and then was defeated in his reelection bid.

Five Presidents is not only an eye-opening, behind-the-scenes look at key historical events during the 1960s and ’70s, but it is also an informative study on the different leadership styles of these five unique men. Eisenhower ran the executive branch like a general, Kennedy was an idealist, Johnson used brute force, Nixon started off well and allowed his own insecurities to derail him, and Ford served as the “ordinary man” trying to clean up the mess left by his predecessor.

Mr. Hill also documents the changes in the operations of the Secret Service. When he began his assignment, there were no bullet-proof presidential vehicles, no protection for presidential candidates (only elected officials), no permanent residence for the vice president, and no Air Force Two. By the time he retired, all of these things—and many more—had been implemented.

Whether you enjoy history, leadership, or presidential biographies, Five Presidents will be a highly enjoyable and informative book for you.