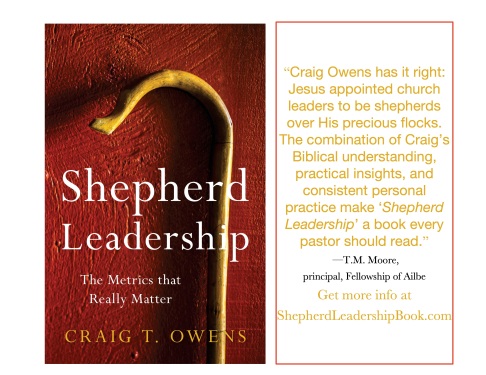 T.M. Moore wrote, “It’s not likely John the Baptist would be welcomed in many pulpits today. Even though Edwards used him as a model of ‘The True Excellency of a Gospel Minister,’ few and far between are the shepherds today who would even think of adopting his example.

“Edwards wrote, ‘He also shone bright in his conversation, and his eminent mortification and renunciation of the enjoyments of the world; his great diligence and laboriousness in his work, his impartiality in it, declaring the mind and will of God to all sorts without distinction; his great humility, rejoicing in the increase of the honour of Christ, though his honour was diminished, as the brightness of the star diminishes as the light of the sun increases; and in his faithfulness and courage, though it cost him his own life.’

“These days many pastors secure their ‘honor’ in subtle but significant ways. They go by ‘Reverend’ or ‘Doctor.’ Have reserved parking places and their name on the church sign. Adopt fashionable garb and speech. Try hard to be friends with all the right people. Such shepherds want to advance their honor; John worked to have his honor diminished, that the honor of Christ might increase.”

I share T.M.’s passion for shepherd in the Church, which is why he graciously wrote an endorsement for my book Shepherd Leadership: The Metrics That Really Matter.

Vaughn Shoemaker (1902-1991) was an American editorial cartoonist. He won the 1938 and 1947 Pulitzer Prizes for Editorial Cartooning for his work with the Chicago Daily News. He was the creator of the character, John Q. Public, and a faithful Assemblies of God layman. I am a fourth-generational Pentecostal in the Assembly of God fellowship, so I love studying more about the men and women who have made this such a robust missions-minded fellowship! Read more of this amazing man here.

Dan Reiland has an important list for leaders: 11 Leadership Mistakes To Avoid At All Costs.

“This is a radical call for us to look hard at our present lives to see if they are shaped by the hope of the resurrection. Do we make decisions on the basis of gain in this world or gain in the next? Do we take risks for love’s sake that can only be explained as wise if there is a resurrection?” —John Piper

For parents and anyone else who works with students, this is a segment from the Axis ministry’s Culture Translator newsletter:

In his book Man’s Search for Meaning, Viktor Frankl writes that “success, like happiness, cannot be pursued; it must ensue, and it only does so as the unintended side-effect of one’s personal dedication to a cause greater than oneself… Happiness must happen, and the same holds for success: you have to let it happen by not caring about it.”

An idea like that would likely seem counterintuitive to many of the students in Professor Santos’ classes—students who have been raised from young ages to pay careful and constant attention to their academic viability. Students like these grow up with a hope and an expectation that achieving perfection (whether academic, relational, spiritual, or other) will finally yield the happiness, satisfaction, and recognition they’ve been looking for. But after achieving perfection, the next source of anxiety is maintainingperfection. As Christopher Fry once put it, “What, after all is a halo? It’s only one more thing to keep clean.”

Jesus concludes Matthew 5 by saying to his hearers, “Be perfect, therefore, as your heavenly Father is perfect.” It’s a verse most Christians may not want to touch, and one that anxious overachievers might point to as justification for their continual striving. But as C.S. Lewis points out in Mere Christianity, Jesus’ words presuppose our dependence on Him. He writes, “The command Be ye perfect is not idealistic gas. Nor is it a command to do the impossible. He is going to make us into creatures that can obey that command… The process will be long and in parts very painful, but that is what we are in for. Nothing less. He meant what He said.”

In other words, our betterment is in partnership with our Creator, and happiness is merely a by-product of our total surrender. Whoever has ears, let them hear.