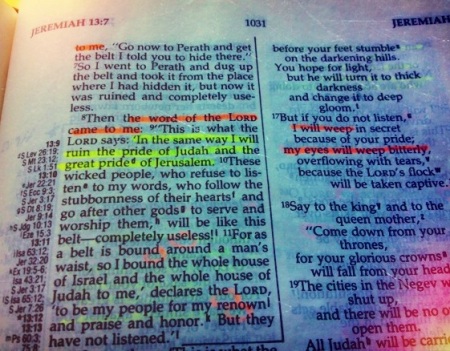 Back in the pre-cell phone days, my parents had to develop another system to communicate with me. Many times it was simply an agreement before I left the house like, “Be home at 6 o’clock for dinner.” Or maybe something like, “Come inside when the streetlight turns on.”

I was usually pretty good about following through on this. But occasionally I would get so caught up in what I was doing with my friends that time just sort of got away from me. That’s when I would hear the distinct voice of my Mom calling me. Not on the phone, but with her hands cupped to her mouth, yelling, “Craaaiiig! Time to come home!”

If she was calling me, that meant I missed the deadline. I wasn’t where I was supposed to be.

God spoke to His people at first because they were close to Him. But then He had to call to them because they had gotten farther away from Him.

If God is calling me, perhaps it’s because I’ve gotten too far away. Maybe not on purpose. Maybe I just got caught up in what I was doing. Maybe I allowed something else to capture my attention.

I don’t want God to have to call me. I don’t even want to be close enough that He has to speak to me. I want to be so close to Him that just His whisper gets my undivided attention.

What about you: How close do you want to be?