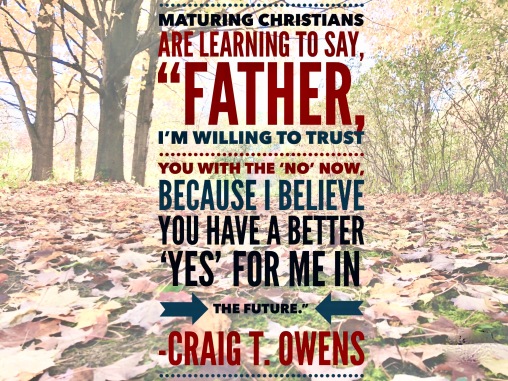 I’m not a sadist. Nor am I a pessimist.

But I am a child that is still learning that I cannot always get my way.

We’re getting ready to start 2011 with a week of prayer, and I’m going to open 2011 with a series of Sunday messages on prayer: The Perfect Prayer. But in studying more about prayer, I’m always confronted by this: Why are some prayers unanswered.

As I pondered that today, I thought about saying “No” to my kids. I love my children and I want them to be happy. They love pop (or “soda” for some of you, or “Coke” for others), and would drink it all the time if I said “Yes.”

Our Heavenly Father sees my future even more clearly than I can see it for my children. He wants me to be blessed, which is why He must say “No” at times. I’m a child who doesn’t know what is best for me.

“Getting all you want would bring incalculable damage and grief to you. Be thankful for unanswered prayer. It may be a sign of God’s favor.” —R.T. Kendall

So as I’m growing in God I can say, “Father, I’m willing to trust you with the ‘No’ now, because I believe you have a better ‘Yes’ for me in the future.”

My temporary unhappiness with unanswered prayer makes me happy because I know God has something better for me. I’m going to keep on asking, seeking, and knocking, but I’m also going to keep on trusting my Heavenly Father for His very best.