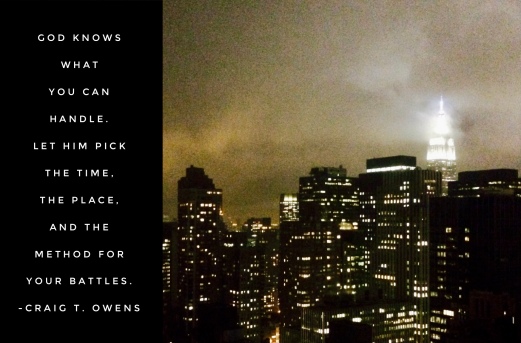 So let Him choose your battles for you. He knows what you can handle. Let Him pick the time, the place, and the method for your battles.

When Pharaoh let the people go, God did not lead them on the road through the Philistine country, though that was shorter. For God said, “If they face war, they might change their minds and return to Egypt.” So God led the people around by the desert road toward the Red Sea. (Exodus 13:17-18)

I will send my terror ahead of you and throw into confusion every nation you encounter. I will make all your enemies turn their backs and run. I will send the hornet ahead of you to drive the Hivites, Canaanites and Hittites out of your way. But I will not drive them out in a single year, because the land would become desolate and the wild animals too numerous for you. Little by little I will drive them out before you, until you have increased enough to take possession of the land. (Exodus 23:27-30)

Are you in a battle now? If God brought you to this point, hang in there because He will give you the victory. Don’t try to pick a fight in territory God hasn’t given you. Wait for His timing, His place, and His method of victory.

If you’re in a battle now, let me know, and I’d be honored to stand with you in prayer.