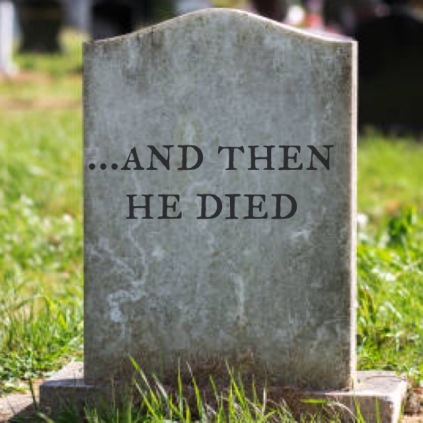 That’s the end of his life. All those years living and that’s all his obituary says: “and then he died.”

Genesis 5 is the lineage of Adam. A mind-numbing list of names and years scroll by:

For each man we hear the name of one of his sons and how long he lived, but nothing more. Like a modern-day tombstone:

The dash between the dates covers childhood, schooling, marriage, inventions, parenthood, and so many other things. But years later, more and more of the details are forgotten and only the dash remains to represent the sum total of the deceased’s life.

And then comes Enoch.

All of the same details are there. Well, except for the “and then he died epitaph.” But actually, there’s so much more. Instead of a death, there’s a phrase that appears only for him: “Enoch walked with God.” The phrase literally means “to be continually conversant.”

Because Enoch lived this way, he didn’t really die. Instead, “He was no more.” He wasn’t here any longer because he is still walking with God. What an incredible blessing to his future generations! He was a blessing while he was alive, and he continues to be a blessing after he is no more.

Enoch’s tombstone reads differently from everyone else. It’s the way I would want my tombstone to read:

1966  ─ He Walked With God ─ He Is Still Walking With God

In The Seven Habits Of Highly Effective People, Stephen Covey suggests living my life today consistent with what I would like said at my own funeral. It starts with a decision: “Today I will be continually conversant with God.” Then at my funeral, they can say of me, like the Bible says of Enoch: “He didn’t die. He’s just not here any longer. He is walking with God in heaven, just like he walked with Him here on earth.”

What do you want said about your dash?

Do you want your life to simply end with “and then he died”? Do you want something more? Make your dash a continual conversation, a daily walk, with God, and all of your future generations won’t see just a dash, they’ll remember “He is no more. He walked with God, and he is still walking with God!”

One Response to ““And Then He Died…””