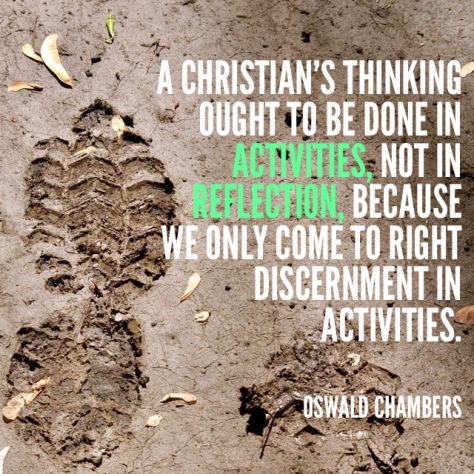 To think or to act? That is the question. Or maybe the question should be, which comes first: the thinking or the acting? Do I think about something and then go do it? Or do I do something first and then think about what I’ve done and how I could do it better next time?

The answer, I believe, is yes.

You could be the most creative thinker in the world, your thoughts could be off on another plane, but if you do nothing with what you’re thinking, all of those great insights are wasted.

On the other hand, many people hold to the axiom that experience is the best teacher, so they just do and do and do. But experience is not the teacher; we only learn when we stop to think about what we’ve done.

William Wilberforce was already a rising star in British politics when he experienced a deeper understanding of his relationship to God. Suddenly this man of word and action wanted to do nothing more than meditate on the greatness of God. Wilberforce believed that he could best serve God by withdrawing from society and simply thinking about God.

His good friend and future prime minister William Pitt disagreed. Pitt wrote to Wilberforce, “Why then this preparation of solitude which can hardly avoid tincturing the mind either with melancholy or superstition? … Surely the principles as well as the practice of Christianity are simple and lead not to meditation but to action.” Or as the line from Amazing Grace has it, “We humbly suggest you can do both.”

“God will never allow us to divide our lives into sacred and secular, into study and activity. We generally think of a student as one who shuts himself up and studies in a reflective way, but that is never revealed in God’s book. A Christian’s thinking ought to be done in activities, not in reflection, because we only come to right discernment in activities.”

Whether it starts with thinking or starts with action, successful thinking-doing must include both. Think about it → act on it → think about your results → do it again better than last time.

Paul wrote to the Romans how thinking and action work together when he said, “for their own conscience and thoughts either accuse them or tell them they are doing right” (Romans 2:5 NLT). The Amplified Bible renders this phrase, “their consciences (sense of right and wrong) also bear witness; and their decisions (their arguments of reason, their condemning or approving thoughts) will accuse or perhaps defend and excuse them.”