Humility Is A Daily Choice 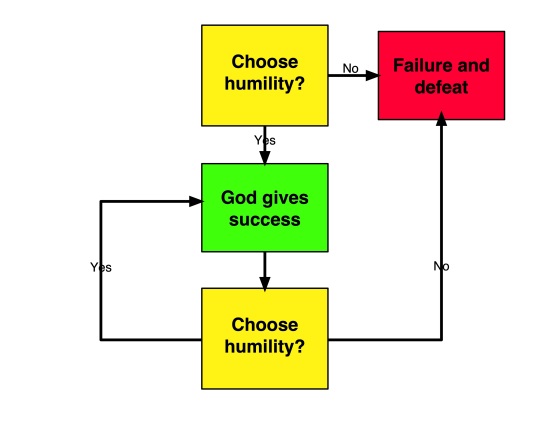 …As long as Uzziah sought the Lord, God gave him success. … But after Uzziah became powerful, his pride led to his downfall… (2 Chronicles 26:5, 16).

Humility has to be an ongoing choice. That choice becomes harder as the successes become bigger or more frequent. But choosing pride in “my accomplishments” will undo all the previous successes.

The only way to keep these blessings is two words: IF ONLY. If only I will continue to remain humble before God and obedient to Him.

Uzziah, sadly, didn’t make that choice. His pride in God’s success led to his downfall.

His son Jotham learned this lesson. Jotham grew powerful because he walked steadfastly before the Lord his God (27:6).

I like the KJV of this verse that says, “Jotham grew powerful because he prepared his ways before the Lord his God.”

Notice two phrases in this sentence—grew powerful and walked steadfastly. They are directly tied to each other: Jotham became powerful only because he was determined to live righteously and humbly in God’s sight. The more powerful he became, the more he increased his commitment to live humbly before God’s face.

He did what was right in the eyes of the Lord, just as his father Uzziah had done, BUT unlike him he did not enter the temple of the Lord (v. 2).

Jotham humbly prepared his ways before the Lord, and when God made him powerful Jotham re-committed to stay humble. Great choice!

I’ll say it again: The only way to keep God’s blessings on my initial humble choice is to continue to choose humility at every moment of success.

2 Responses to “Humility Is A Daily Choice”