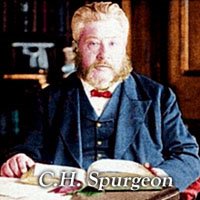 I love this passage from one of Charles Spurgeon’s sermons—

“Edward the Second, one of our kings, was exceedingly enraged against one of his courtiers; out hunting one day, he threatened the courtier with the severest punishment. There was a river between them at the time, and the courtier thinking that he was perfectly safe, ventured to offer some jeering remark against the king—telling him that at any rate he would not be likely to chastise him until he got at him. The king, feeling his anger hot within him, told him that the water should not long divide them, leaped into the middle of the stream, and with some difficulty gained the other side.

“The courtier in great alarm fled in terror, and the king pursued him with might and main, spurring his horse to the utmost. Nor did his anger cease; he carried his drawn sword in his hand with the intention of killing him. At last the courtier, seeing that there was no hope for any escape, knelt down upon the grass, and laying bare his neck, said, ‘I heartily deserve to die; mercy, King, mercy!’ The king sent back the sword into the scabbard in a moment, and said, ‘Whilst you sought to escape me I determined to destroy you, but when I see you humble at my feet I freely forgive you.’

“Even so it is with the King of heaven. Sinners, you say there is this life between you and God; but how soon will the white horse of Justice pass the stream, and then, flee as you may today, He will surely overtake you. He now is swift to destroy; let it be yours on your knees to make confession of your sin and say, ‘I deserve Thy wrath, great King;’ and if to this you are enabled to add the plea of the precious blood of Christ, the sword of justice will return into its scabbard, and He will say, ‘I am just, and yet the justifier of the ungodly.’”