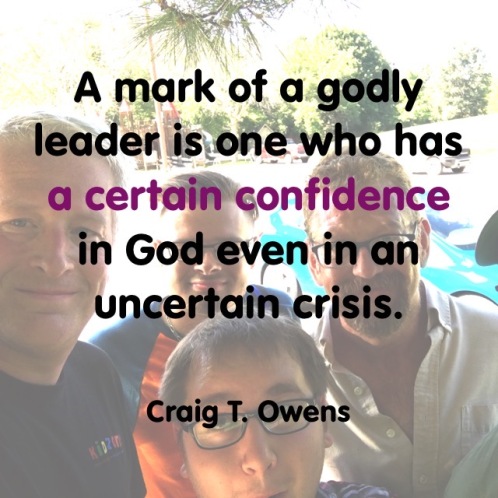 We often remember and even hold in high regard those leaders who rise up in times of crisis or uncertainty. But I think we might be shocked if we knew exactly how scared these seemingly unflappable leaders actually were!

The Philistines really had the Israelites on the ropes. Israel’s army was slowing melting away, as soldiers one by one were deserting and heading home. The Philistines had captured all of the sword-makers, so that there were only two swords left—one for King Saul and one for his son Jonathan.

And to make matters even more desperate, the Philistines occupied all the strategic high ground, so that even if the Israelites were going to attempt an attack, they would have to scale the cliffs in order to do so.

For Jonathan, this situation was unbearable. So he said to his armor-bearer (keep in mind that this armor-bearer didn’t really have any armor to bear!), “Let’s go attack the Philistines.” And then he adds this line that probably didn’t instill too much confidence in anyone, “Perhaps the Lord will give us victory.”

Many years later, when the nation of Israel was in exile in Babylon, three Jewish young men found themselves in a literal hot spot. King Nebuchadnezzar had built an enormous statue of himself and commanded that everyone bow down and worship it. Shadrach, Meshach, and Abednego had been promoted into leadership positions in the capital city of Susa, so there was no hiding in the outreaches of the countryside for them. Their disobedience to the king’s command would make them stand out to everyone. The king had ordered that anyone who disobeyed his edict would be thrown into a fiery furnace.

Shadrach, Meshach, and Abednego were God-fearing men and knew that they could not worship any other god except Yahweh. When the king confronted their disobedience, they also responded with words that didn’t sound very confident, “God can save us, but we’re not sure if He will save us. But even if He doesn’t, we’re not going to bend our knee.”

“Perhaps” and “if” don’t sound like very confident words, do they?

A mark of a godly leader is one who has a certain confidence in God even in an uncertain crisis.

Jonathan, and Shadrach, and Meshach, and Abednego would all tell us, “Whether God was going to give us victory in the moment of crisis or not, we will remain in God’s presence! We will not compromise. We will not give in to fear. We will not disobey God. We will continue to cling to Him—rescue or not—knowing that He will be glorified in whatever way He chooses to respond.”

These young men teach an invaluable lesson for all of us even today: Trust God no matter how uncertain the times are.

This is part 45 in my series on godly leadership. You can check out all of my posts in this series by clicking here.